The Russian Army Now Has a Drone Hunting Unit

Formed of contract servicemen, sergeants and other specialists, the "drone hunting" unit was introduced to the world by the Kremlin last month.

The Russian Army now has a special unit of drone hunters. The first of its kind, the ground-based collective operates electronic jamming systems that are meant to sever radio connections between unmanned aerial vehicles (UAVs) and their controllers.

Formed in the Western Russian region of Kursk, the unit to introduced to the world officially by the Kremlin last month.

"The company is based on contract servicemen, sergeants, and officers—specialists for combating drones with the help of electronic-warfare assets," the Kremlin stated, as reported by VICE’s Motherboard.

"They are the special forces of electronic warfare," Col. Alexander Vostrikov, the unit's command, said in the official statement.

The photo released by the Kremlin of some of the unit’s equipment shows a Krasukha jammer, or a powerful radio emitter on a large, military truck. The jammers were previously utilized in Syria to shield Russian and other allied forces in the war-torn country. It disrupts enemy signals by preventing controllers from managing their drones using satellites.

However, not much of a threat is posed to the US military. For these radio jammers to work, the unit would have to position itself pretty close to the targets. It would seem to be hard to do unless you knew where they were going to be and when" one former US drone-developer explained on condition of anonymity to Motherboard. 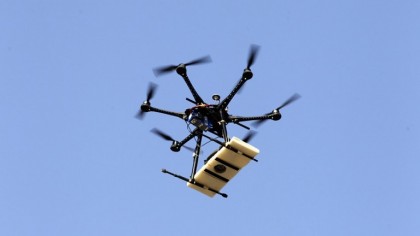 Still, the Russian military is focused on elite training for this new counter-drone unit.

“Work on the training of servicemen of such a unit is carried out according to a program that is broader than the training periods for the preparation of line divisions and, in essence, their level and periodicity of classes now go to a qualitative level of training comparable in intensity to the training of special purpose units,” said Vostrikov.

So far, about twenty select units have been formed within the Russian military to deal with the threat of drones.

While the Russians are preparing their men for drone attacks, the French military is going to the birds. Drone-hunting birds of prey are currently under training at a French Air Force base in South-western France, according to TIME magazine.

They were trained from birth to exist alongside drones and even kept near to them during feeding. When they’re able to fly, the fledgling’s are brought to a field where they are trained to intercept drones and are rewarded with meat when they take a few UAVs down.

"These eagles can spot the drones several thousand meters (yards) away and neutralize them," Jean-Christophe Zimmerman, a French Air Force general, told Reuters.

The birds are not meant for meaner, militarised drones instead, they are trained to attack smaller spy drones that may lurk near bases, airports and other vulnerable areas. It’s a safer solution than artillery or netting.

There’s apparently something to this tactic, Dutch police in The Netherlands also use eagles to capture illegal drones.