The Secrets of the Prague Astronomical Clock

The Prague Astronomical Clock is one of the world's oldest fully functional astronomical clocks.

It is also a magnificent blend of mechanical engineering and art.

Let's have a look at the history and workings of this iconic timepiece.

What does the astronomical clock do?

Like other astronomical clocks, the famous Prague example is effectively a specially designed mechanism to display astronomical information. Many, like the Orloj, tend to show the relative positions of the Sun, Moon, Zodiac constellations and, sometimes, other planets.

The astronomical clock in Prague, otherwise known as The Orloj, does all this, and much more. It tells the time, provides the date, shows astronomical and zodiacal information, and, best of all, provides some theatre for its viewers on the hour, every hour.

Unsurprisingly, in order to provide this level of functionality, its mechanism is split into several distinct parts.

The first, and most striking, is its impressive and beautifully ornate astronomical dial. This represents the position of the Sun and Moon in the sky and other various astronomical details.

An astronomical dial is a form of the mechanical astrolabe which was commonly used in medieval timekeeping and astronomical studies.

The main stationary background to the clock's face has a wealth of information to anyone who is able to read it. On the outermost ring of the background is a series of glyphs that are representative of ancient Czech time.

Moving closer to the center, a set of Roman numerals can be seen. These, like most traditional clocks, are used to indicate 24 hour time.

Each of the various hues of blue and red within the main plate indicate events like sunrise, daybreak, daytime, nighttime etc as well as including various geographical information like the location of tropics and the equator.

The Earth, or position of the observer, is located in the very center of the dial.

Superimposed on the main astrolabe is the Zodiacal ring. This, you won't be surprised to learn, displays the various signs of the zodiac and is intended to mark the location of the Sun on the ecliptic.

These zodiac signs are shown in anticlockwise order.

The next most impressive part is a set of seemingly stationary statues dedicated to four 'evils' or 'vices' next to the clock and four 'virtues' next to the lower calendar dial. The so-called evils include figures of icons like Death. 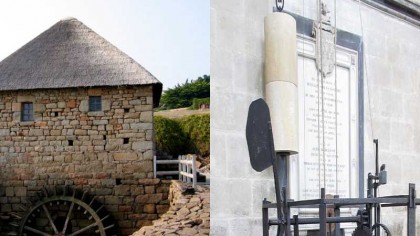 Mechanical Engineering in the Middle Ages: The Catapult, Mechanical Clocks and Many More we Never Knew About

Just above the main clock are two blue doors that open to reveal the "The Walk of the Apostles". Between 9 am and 9 pm, each hour, on the hour, the statues become partially animated with, for example, Death ringing his bell.

Below the main astrolabe and clock is the calendar dial with various painted 'medallions', each one representing the calendar months.

The subject of each shows various figures in fields to indicate the months and seasons. Another smaller set of images are displayed closer to the center, each representing each of the signs of the zodiac.

The current date is tracked around the circumference of the dial which also indicates annual events like each Saints Feast Day.

How old is the astronomical clock?

The Prague Astronomical Clock was first installed in 1410. This makes it the world's third-oldest astronomical clock and the oldest still in operation today.

At the time of writing, this makes the clock 609 years old and still going strong. The first recorded mention of the clock was in October of the same year.

But it should be pointed out that this date was when the oldest part of the clock was installed, the Orloj. Within the following hundred years, the lower calendar dial was added in around 1490.

Around the same time, the incredible gothic statues were also added. At some time in the late 1600s, probably between 1629 and 1659, the wooden statues were installed. The Apostle statues were added during a major refit between 1787 and 1791.

The clock tower's iconic golden crowing rooster was added in around 1865.

Throughout time the clock has been subject to continuous maintenance and repair. In fact, there is a legend that if the clock were to ever fall into disrepair, then the city will suffer.

It was heavily damaged during the Second World War during the Prague uprising against occupying Nazi forces. After significant effort, the machinery was repaired, the wooden Apostles restored by Vojtěch Sucharda, and the Orloj started working again in 1948.

Another phase of renovation was undertaken in 2005 with the lower calendar ring and statures restored. Anti-pigeon nets were also installed around the wooden statues.

The last renovation of the astronomical clock was carried out from January to September 2018, following a reconstruction of the Old Town Tower. During the renovation, an electric clock mechanism that was in operation since 1948 was replaced by an original mechanism from the 1860s.

Who built the astronomical clock in Prague?

For many years it was believed that the clock was designed and built by clock-master Jan Růže (also called Hanuš). This has since been shown to be a historical mistake.

There is a local legend that the original clockmaker was blinded by city officials after completing their work. This was to prevent them from ever replicating their masterpiece elsewhere - a fine reward for their hard work.

Enraged by the act, the blind clockmaker climbed the tower and sabotaged his work to stop it working. The clock then remained silent for more than fifty years before being brought back into working order by Jan Taborský in 1552.

In fact, this event never happened and Hanus does not appear to be the original craftsman. It is currently understood that the clock was actually built by one Mikuláš of Kadaň.

It appears he was also assisted by a Catholic priest and scientist Jan Sindel.

Sindel offered an astronomers insight with Mikulas making the clock actually work. Historical documents of the time support this with Mikuláš heavily praised for this incredible work by Prague council officials.

What is the hidden message of the astronomical clock?

It seems the Prague Astronomical Clock is a gift that keeps on giving. During recent refurbishment works of the clock, a secret hidden message was uncovered inside one of its statues.

Repair works were conducted during January of last year which included restoration work on some of its sculpted figures.

The statues in question included the famous Apostles who appear in the top windows every hour during the daytime. Whilst working on them, one of the statues appeared to be a lot heavier than its brethren.

The statue in question, that of St. Thomas, was later removed and X-rayed to see if any light could be thrown on the mystery. It was found that a strange metal case, with a message, appeared to have been inserted into him.

Restorers were able to remove the case safely and successfully opened it up. What they found was a literal message from the past.

It was written by a sculptor called Vojtěch Sucharda. He was commissioned to re-create some of the sculptures after the clock tower was heavily damaged during the Prague Uprising of World War 2.

The message reveals the sculptor's more extensive plans for the Astronomical Clock, which were never completed. He also complained about the conditions at that time and the start of the communist era.

“Just when we think that we know everything about a monument, such as Old Town Hall, we can be surprised by a new finding. The reconstruction gave us the 70-year old message from Mr. Sucharda, who was commissioned to create new wooden sculptures of the Apostles and other figures in the post-war period,” said city councilor Jan Wolf.

The restoration work also uncovered some other hidden features of the clock tower dating back to around the 15th Century. Several stone creature sculptures were uncovered in the corners under the calendar dial behind some timbers.

It appears these were some of the original details of the tower before the installation of the dial in the late 1400s.

“I was very pleased with the discovery of stone statues of animals, the origin of which could be the first stage of ornamentation at the beginning of the 15th century. It is exciting that there is still something to discover and extend our historical knowledge. Who knows what else we're going to discover,” Wolf added.