Research estimates that if conservation efforts are not improved, large mammal species will become extinct during the next five decades. Nature will need 3-5 million years to recover.

Scientific evidence shows that humans are causing the sixth mass extinction on Earth. Half of the planet's wildlife has died off in the past 40 years at an incredibly fast and alarming rate. 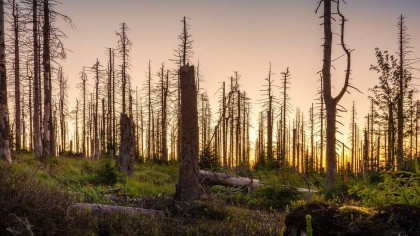 Earth's Heaviest and Oldest Organism is Being Decimated by Humans

According to a team of researchers from Aarhus University in Denmark and the University of Gothenburg in Sweden, species are dying out at such a fast pace that evolution, which is nature's built-in mechanism of survival, is unable to keep up.

Matt Davis, Søren Faurby, and Jens-Christian Svenning, authors of the paper Mammal Diversity Will Take Millions of Years to Recover from the Current Biodiversity Crisis, found that the current incipient sixth mass extinction that started in the Late Pleistocene has already erased over 300 mammal species, consequently erasing more than 2.5 billion of unique evolutionary history along the way.

Many mammal species are going to become extinct during the next five decades. To be able to recover to current or similar biodiversity, nature is going to need an estimate of 3-5 million years. It doesn't sound too promising.

This means that the surviving smaller animals will have to evolve and diversify as fast as they can to make up for the loss of the large mammals. But this will take 3 to 5 million years. In just a few centuries' time, the largest surviving mammal left may become the cow.

Can existing mammals naturally regenerate this lost biodiversity? Not quite

"Large mammals, or megafaunas, such as giant sloths and saber-toothed tigers, which became extinct about 10,000 years ago, were highly evolutionarily distinct. Since they had few close relatives, their extinctions meant that entire branches of Earth's evolutionary tree were chopped off," says paleontologist and lead researcher Matt Davis from Aarhus University.

"There are hundreds of species of shrew, so they can weather a few extinctions. There were only four species of saber-toothed tigers; they all went extinct," he says.

The researchers used powerful computers, advanced evolutionary simulations, and comprehensive data about evolutionary relationships and body sizes of existing and extinct mammals in their study. The scientists were able to quantify the evolutionary time lost and the recovery time from past and potential future extinctions.

According to the abstract of the paper published in the scientific journal PNAS, the scientists used a birth-death tree framework to show that even if extinction rates slow to pre-anthropogenic background levels, recovery of lost phylogenetic diversity, which can only be restored with time as lineages evolve and create new evolutionary history, will most likely take millions of years.

The findings confirm and emphasize the severity of the potential sixth mass extinction that is underway as well as the urgent need to avoid the loss of unique evolutionary history.

The sixth extinction: This time humans are the asteroid

"Although we once lived in a world of giants: giant beavers, giant armadillos, giant deer, etc., we now live in a world that is becoming increasingly impoverished of large wild mammalian species. The few remaining giants, such as rhinos and elephants, are in danger of being wiped out very rapidly," says Professor Jens-Christian Svenning from Aarhus University.

Planet Earth has already suffered five mass extinction events in prehistoric times; all of them exterminated species in large numbers in a short period of time. Scientists have estimated that between 50 to 75 percent of plant and animal life were lost in each of the events.

Megafauna extinction has always been a result of the effects of human hunting, climate change, other human influences such as shrinking the space where wild animals live, and the big changes that natural ecosystems undergo when big mammals start to disappear.

In the past, large animals coped with changes in temperature by moving to other locations. Today, animals are confined to the spaces that are left by humans. Cities, roads, bridges, industrialization, mass consumption, destruction of natural animal habitats, and other human-caused reasons are responsible for the current mass extinction. Moving location is not an option for species any longer. They just die.

Timeline of mass extinctions on Earth

"It is much easier to save biodiversity now than to re-evolve it later," says Matt Davis. However, this can take global education and awareness on the key problems causing the sixth mass extinction on Earth.

Motorola May Bring Over-the-Air Charging to Its Next Smartphones