Also called the “Roof of the World” due to its gargantuan Tibetan Plateau, the considerable heights within this mountain range makes it impossible for airplanes to fly over.

Why don’t planes fly over Tibet? There is a common aviation rule when it comes to planes soaring over this particular part of the earth, and there are no strange phenomena involved, rather the problem is the extremely high mountain ranges within the area.

Also called the “Roof of the World” due to its gargantuan Tibetan Plateau, Tibet's considerable height makes it impossible for airplanes to fly over. The question led a thread on Quora, where everyone from airline employees to mathematicians gave their two cents.

Tim Hibbetts, an airline worker who started the discussion, noted that in this part of the world, “low” areas average above 12,000′. This presents a problem since, in the case of decompression in the cabin, most airlines only have 20 minutes of oxygen for passengers.

Here's a quick video to give you a clearer image in mind;

“There are flight rules in place that force operators to be able to descend to 10,000′ prior to running out of emergency oxygen. Obviously, this part of Asia is a huge region, and there would be a large swath that would be impossible to escape so quickly,” writes Hibbetts.

The only airline to develop useable escape routes over Tibet is Cathay Pacific.

One commenter named Balaji Viswanathan, who studied airline profits, stated that another essential reason for lack of air traffic over the Tibetan plateau has more to do with the lack of need than anything else.

“India and China don’t have frequent flights between them. If they had, probably some of the flights could have flown over Tibet. Although they are neighbors, India and China live in two different countries and cultural zones. There has never been an overlapping empire at any point of time in history,” he wrote. 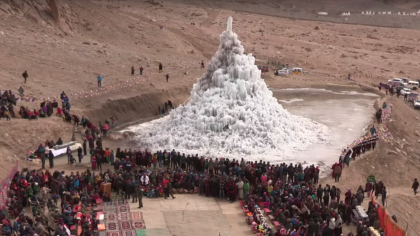 Another commenter stated that another possible cause is clear air turbulence over the peaks.

Clear air turbulence is turbulence that you can’t see; it's normally related to jet streams or unstable pockets of air. Disruption of airflow created by the mountain creates eddies, which if you fly through can be very turbulent. The only prediction tool for clear air turbulence is the experience of other aircraft, which isn’t that prevalent over the Tibetan Plateau.

The plateau is surrounded by the extensive mountain ranges of Himalaya. It is bounded in the north by a broad escarpment where the altitude drops from around 5,000 meters (16,000 ft) to 1,500 meters (4,900 ft) over a horizontal distance of fewer than 150 kilometers (93 mi).

Despite the terrifying consequences associated with flying over this part of the world, there are still airports in this region, one that has gained a certain level of note, is Paro Airport in Bhutan. This strip is so dicey that only eight pilots on the planet can land here. It’s 1.5 miles above sea level and surrounded by 18,000ft peaks. High winds through the valley cause severe turbulence. An estimated 30,000 tourists use this airport each year.

The complicated truth about plastic recycling. Is it a myth?