NRO has sent another secret spy satellite into space. The satellite was launched atop a United Launch Alliance Rocket.

The latest in a series of classified spy satellites was launched on Sunday morning by the United States National Reconnaissance Office (NRO). The NROL-42 satellite was sent skywards with the force of a United Launch Alliance Atlas V rocket from the Vandenberg Air Force Base in California. While it was confirmed the satellite was sent to space, no other details of its mission are known.

Air Force Col. Gregory Wood, 30th Space Wing vice commander at Vandenberg, released a statement before the launch saying, “This launch is the culmination of many months of work by United Launch Alliance, the National Reconnaissance Office and the 30th Space Wing. All of Team Vandenberg is dedicated to mission success and proud to play a part in delivering these capabilities to our nation." He went on to say, "This launch is a prime example of teamwork by multiple organizations that have worked around the clock to assure mission safety and security. Given the dedication of the men and women have worked to ensure readiness of the launch vehicle and payload, we're on track for a successful launch."

The Atlas V rocket has been a part of 15 NRO satellite missions. It was launched by the United Launch Alliance which is a collaboration between Lockheed Martin and Boeing. The NRO was created soon after the Soviet Union’s launch of Sputnik, by Dwight D. Eisenhower. It was reportedly an influential organization in the U.S.'s role in the space race of the 1960’s. The NRO’s existence was kept a secret from the public until 1992. It is considered to be among the big five of the U.S. intelligence agencies. It has headquarters close the Washington Dulles International Airport. Its main task is to design, build and operate reconnaissance satellites. 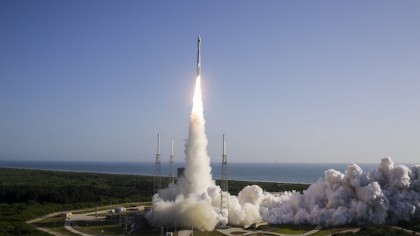 The NRO has been the center of several controversies. In the mid-1990’s it was accused of hiding millions of dollars in unspent funds from the United States government and in 2001 they were again under public scrutiny when by bizarre coincidence the NRO was planning a training exercise for its staff that involved crashing an airplane into one of its buildings. Conspiracy theories related to the terror attack in Manhattan claim this is proof the attack on the World Trade Center was an inside job organized by the U.S. government.

While the NRO is said to be the highest funded of the U.S. intelligence agencies, it is believed to have a small internal workforce and instead relies on external military contractors to complete its missions. The Atlas V is an example of this model of operation. The rocket has also played a role it the missions of other large U.S. government agencies. It assisted NASA in the launch of the Mars rover Curiosity. NRO has also used SpaceX rockets to launch top secret satellites into space. This launch also happened from the Vandenberg airbase.