The Use of Drugs During Wartime and Peace

Both Nazi Germany and the Allies used amphetamines during WWII, and one U.S. President used them during a time of peace.

From April to June 1940, over the skies of Great Britain, a real-life life or death struggle was taking place. These three months were part of "The Blitz" - Germany's relentless aerial bombing attack on Great Britain.

Doing the Impossible Thanks to Drugs

Things for the British weren't going any better on the ground, where German Wehrmacht soldiers marched and fought for 10 straight days without a break. Moving an incredible rapid 22 miles per day, they pushed British troops all the way back to the English Channel, and it was only the extraordinary effort of rescue operations at Dunkirk that saved them.

In Allied war rooms all over Europe, the question was being raised: How do you defeat such an enemy? Then, British intelligence agents found a vial in a German plane that was downed in southern England. It was labeled "Pervitin".

A whole new arms race had begun — a pharmaceutical arms race, and it was brilliantly described in a recent PBS documentary entitled, "Secrets of the Dead: World War Speed."

While Pervitin was a methamphetamine, American and British troops were soon being dosed, in the form of tablets and inhalants, with the amphetamine Benzedrine. Benzedrine had first been introduced in England in 1935.

One difference between amphetamines and methamphetamines is that methamphetamine enters the brain faster, act quicker and is longer lasting. Amphetamines, such as the drug Adderall, which is often prescribed to treat attention deficit disorders, stimulates the central nervous system directly.

Benzedrine enabled Allied soldiers to stay awake for days at a time and to perform for longer periods under difficult conditions. The drug also increased soldiers' aggression, improved their confidence, and boosted their morale.

American Soldiers Get Speed for the Battle of Al Alamein

Nowhere was a boost in morale more needed than in North Africa in 1942. There, British troops had been pushed back over 600 miles by Germany's crack Africa Corps, and they were dug in around a small trading post called Al Alamein. Then, General Bernard Montgomery arrived along with Benzedrine and Methylamphetamine for his troops.

For the Allied landing in North Africa in November 1942, code named "Operation Torch," American troops were dosed with "speed" on the orders of Supreme Allied Commander Gen. Dwight D. Eisenhower. Half a million Benzedrine tablets were supplied.

According to the PBS documentary, a 1942 memo from a British commanding officer stated that prior to a battle in Egypt, soldiers with the 24th Armored Tank Brigade had received 20 milligrams of Benzedrine per day. Pilots in the Royal Air Force were receiving 10 milligrams per day.

The group of amphetamines, which includes methamphetamines, are central nervous system stimulants. They increase alertness, decrease appetite and induce a sense of euphoria.

Because methamphetamine floods the brain quicker and lasts longer, it is also more harmful to the central nervous system. Before WWII, German scientists had been experimenting with Pervitin on students, seeing how long they could stay awake while still performing well on exams.

In the 1930s in Germany, Pervitin was marketed as a recreational drug. The maker of Pervitin modeled their marketing campaign on that of Coke.

According to the University of New South Wales, the British War Office estimated that 35 million Pervitin tablets had been dispensed to 3 million German pilots, soldiers, and seamen.

On the American side, coffee was the drug of choice, and it was so necessary to American troops, that to this day, a cup of coffee is known as a "cup of Joe" after the GI Joes.

While amphetamines might have been used in war, they were also used to prevent a war. In June 1961, U.S. President John F. Kennedy was taking amphetamines during his summit with Soviet Premier Nikita Khruschev.

Only recently has Kennedy's shocking addiction to amphetamines come to light. Kennedy was not a well man. He had Addison's disease, which is a failure of the adrenal glands, and he had a herniated disc removed in 1944, and later underwent a risky spinal fusion. In addition to the constant pain, he also suffered from venereal disease and recurrent infections.

It was Kennedy's relationship with "Dr. Feelgood," Dr. Max Jacobson, that turned him into a frequent amphetamine user. Kennedy had met Jacobson through an old Harvard friend, while singer Eddie Fisher has also claimed to make the association. 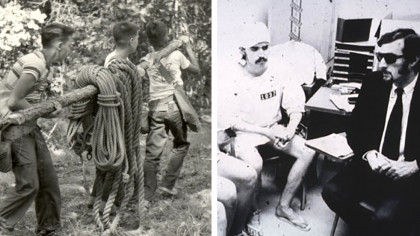 11 Most Controversial Psychological Experiments in History

Jacobson began treating Kennedy even before his election in 1960. After Kennedy re-injured his back in May 1961, he summoned Jacobson to Washington. The following month, Jacobson accompanied Kennedy on his trip to Paris and Vienna.

Eventually, Jacobson came to treat both the President and Mrs. Kennedy. White House gate logs show Jacobson visited the White House more than 30 times in 1961 and 1962.

Attorney General Robert Kennedy was so worried about his brother's drug use that he sent a bottle of Jacobson's "elixir" to the FBI to be tested. President Kennedy is reported to have replied to the criticism by saying, "I don't care if it's horse piss, it's the only thing that works."

Kennedy's other physicians were frantic. His New York-based orthopedic surgeon Hans Kraus told Kennedy in December 1962, "No president with his finger on the red button has any business taking stuff like that."

Kraus, along with Admiral George Burkley, Kennedy's official doctor, threatened to expose the drug-taking if Kennedy didn't stop. Eventually, he did, and the sad fact is that Kennedy was off Dr. Max's shots and painkillers at the time of his assassination.

Today, we know about the side effects of amphetamines, which include addiction, agitation, and anxiety. Film director Darren Aronofsky bravely took on the subject of amphetamine addition in his well-received 2000 movie "Requiem for a Dream."