The Weather Channel's AR Wildfire Animation is The Scariest Yet

In the 21st century, the world has witnessed a dynamic and unrelenting mix of natural disasters which are heavily impacting human populations, with global warming being narrowed down as the biggest reason behind the devastating events. 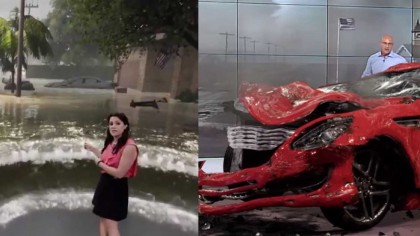 In large part due to these dynamic climate developments, the work of meteorologists has become more important than ever: beyond simply reporting on the progress of a storm or providing weather forecast info for our morning commute, they are tasked with helping us navigate this new global climate reality.

Thankfully, meteorologists and their broadcasters today benefit from many enhanced technologies which were simply not available to weather reporting staff even 15 years ago, most important of which is augmented reality. The Weather Channel has been using this medium in a powerful way to simulate potential dangers which may be lurking around us and warn citizens to be careful.

Getting the Word Out

When it comes to guaranteeing the safety of the general population, weather reporters have the two important tasks of informing and urging action. These two elements are important for one crucial reason: the evidence suggests that too often people learn about the truly destructive nature of a natural disaster only after having witnessed it.

Whether one calls it human ego, human skepticism, or simply misinformation, there is a very strong seeing is believing mentality--or the much more cynical I'll believe it when I see it version--that affects the way many understand how their safety could be impacted.

Efforts like this have been making an enormous difference this year as well as last year when it comes to the string of hurricanes in the western hemisphere. More recently, the Weather Channel got their staff involved in disseminating important info about wildfires, the most recent of which includes meteorologist Stephanie Abrams, and it may have been the best case of AR use yet!

It starts off with the image of the meteorologist inside of what looks like an oversized terrarium, abounding with animals and a dense forest--it goes a bit too much on the Avatar side in the first minute-and-a-half.

The Santa Ana winds are fueling fire weather watches this weekend in California...our @StephanieAbrams shows you just how fast the flames can spark. pic.twitter.com/wXfTkoSOnI

Most compelling is the glaring statistic she uses to convey the increasing threat of wildfires, much of which is accelerated by human activity related to climate change: "Wildfire season has become a year-long threat, burning TWICE the area now than in 1970," adding, "It's true that these fires...they can invigorate nature, but when they flare up in populated areas, they all too often lead to total destruction."

The bottom line is that when it comes to threatening weather, increased knowledge and awareness lead to increased safety. Now, fortunately, the tools we have at our disposal for achieving this goal are much more effective, literally scaring us into more safety.

Behind the Making of Delicious Yet Healthy Lab Grown Meat