Willis Tower, formerly known as the Sears Tower, is an iconic symbol of the city of Chicago. It was designed by the great Fazlur Khan and is arguably his best work.

The Sears Tower, now known as the Willis Tower, is arguably, the crowning glory of the late Fazlur Rahman Khan. When it opened its doors in 1974 it became the world's tallest building, an epithet it maintained for another 24 years.

The Willis Tower was the first skyscraper in the world to be built using Khan's famed bundled tube system. This system, as the name suggests, consists of a bundle or of standalone skyscraper-sized cylinders that are assembled to form a thicker column.

This design served two important purposes. It reduced the need for excessive amounts of steel in the building whilst simultaneously removing the need for internal wind bracing.

Standing proudly at 110 stories in the heart of the downtown Chicago is one of the most iconic buildings on earth, the Willis Tower.

To this day it still counts among the tallest buildings in the world.

The story of Willis Tower began in 1969 when Sears Roebuck and Company (then the world's largest retailer) decided it needed a new central office space for its employees. At that time the company employed 350,000 employees.

They immediately sought out the help of architects Skidmore, Owings and Merril for the tower's design. The ground was broken for the tower in 1970 and it would take a little over 3 years to complete.

When the last beam was installed, it was commemorated with 12,000 signatures from the construction crew, Sears's employees and Chicagoans.

The Willis Tower Transformation: Building 'The Ledge' and a New Skydeck

Despite their investment, Sears Roebuck and Company would only stay in the Willis Tower until 1988.

That year they decided to sell the tower and move out of the building. The tower continued to be known as Sears Tower until 2009.

In 2009, the tower was bought by the Willis Group Holdings, a global insurance broker. They renamed the tower the Willis Tower shortly afterward.

The Skydeck Chicago of the newly named Willis Tower underwent a multi-million dollar renovation that started in July of 2009. U.S. Equities Realty led the design and construction project of the renovation.

This project led to the development of the now famed 'The Ledge' at the tower. The series of glass bays on the 103rd floor grants visitors an unrestricted view of Chicago. It also has glass floors so spectators can see down the full 1,535 feet (412 meters) to the ground below.

The renovation also added a new Skydeck visitor center with museum-quality interactive displays. Since the opening on 'The Ledge' and Skydeck, the Willis Tower has enjoyed record levels of visitors, around 25,000 per day.

The Skydeck Marketplace was opened at Skydeck Chicago in May of 2011. This provided a new 7,500 square feet (2286 m2) retail and cafe area. Here visitors have a selection of over 300 unique Chicago, Ledge and Willis Tower themed items. It also has authentic Chicago food and drinks like Connie's Pizza and Vienna Hot Dogs.

It consists of sets of square-based tube system towers of varying heights, clustered in a 3 by 3 matrix (forming a square base). This produces the tower's iconic staggered level look.

The first building to feature this innovative new system was the 43 story DeWitt-Chestnut Apartment Building, now called Plaza on DeWitt, in Chicago.

This system can work with steel, concrete or other composites of the two.

Fazlur Rahman Khan's innovative system proved very popular: Since the 1960's the vast majority of buildings that exceed 40 stories tend to be built using this system.

This tube system is intended to allow the building to resist lateral loads by effectively being a vertical hollow cantilever structure. The perimeter of each structure consists of closely spaced columns tied together with deep spandrel beams.

Fazlur's tube design transfers some of the gravity load to the perimeter frame thereby improving its ability to resist overturning by lateral loads.

The Willis Tower has become an icon of the Chicago skyline. Even by present-day standards, the Willis Tower was a massive undertaking and a real feat of engineering.

The entire Willis Tower has, according to its official website, around 418,064 m2 of gross floor space over 110 stories. To put that into perspective, that would be around 101 football fields.

The entire structure would weigh in at around 222,500 tons. 76,000 of which would be steel alone. The tower's design was also inspired by a packet of cigarettes. 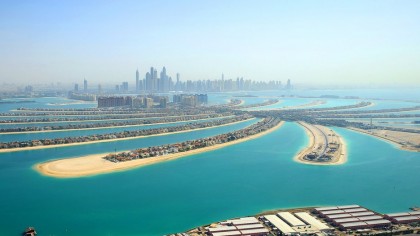 The Willis Tower originally cost $175 million to build and was the world's tallest building until 1998. Each floor of Willis Tower is divided into 75-foot (23 meters), column-free "mega modules". this design allows for maximum flexibility and efficiency for office planning.

The Willis Tower has since been bought by Blackstone Group who acquired it for $1.3 billion in 2015 and was the largest retail transaction in the city of Chicago at the time.

The Willis Tower is currently undergoing a further $500 million renovation project. It is scheduled to be completed in the summer of 2019.

An Enormous Tower in Greece Is Basically the World's Tallest Plant