A team of researchers at INRS have smashed the ten trillion fps barrier with their T-CUP ultra-fast camera.

A research team at the INRS Universite De Recherche has recently built the world's fastest ever camera called T-CUP. It is so quick it is able to capture 10 trillion frames per second (fps)! 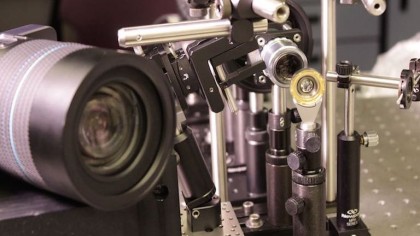 Although ultra-fast cameras have been developed over the past few years, T-CUP leaves them all in the dust.

This camera can now be used to record images in real time at a very short temporal resolution—in a single exposure. It will be very useful for scientists in many different fields and open up doors to probe things like the nanoscale interactions between light and matter.

The team at INRS built the camera to be able to capture events on film that operate at the femtosecond range. This means it will have very useful applications for capturing slow-motion imaging of things like laser pulses.

"Nothing beats a clear image"

Existing lasers at INRS produce ultrashort pulses of light that were, previously, far too quick to capture with existing imaging techniques. But not anymore.

Of course, some measurements have been possible previously but "nothing beats a clear image" says INRS Professor and ultrafast imaging specialist Jinyang Liang.

The research team, led by Caltech's Lihong Wang, put themselves to the task and developed this new record-breaking camera which they have called T-CUP.

This kind of device will likely prove invaluable in other fields for observing the microscopic realm especially dynamic phenomena in biology and physics.

T-CUP is twice as fast as its competition

T-CUP was built on existing technology called compressed ultrafast photography (CUP), a method that it is capable of 100 billion fps. That's very fast but not fast enough for INRS's researchers and to capture what's going on at the femtosecond scale.

A femtosecond is one quadrillionth of a second FYI - that's quick.

The team managed to combine a femtosecond streak camera with a static camera. Any images captured were then run through a technique called Radon transformation.

"We knew that by using only a femtosecond streak camera, the image quality would be limited," said Lihong Wang.

"So to improve this, we added another camera that acquires a static image. Combined with the image acquired by the femtosecond streak camera, we can use what is called a Radon transformation to obtain high-quality images while recording ten trillion frames per second."

Its first test results were encouraging

Initial results from the setup were very encouraging indeed. It was able to capture a single femtosecond pulse of laser light. It managed to record 25 images, each 400 femtoseconds apart.

This level of accuracy was able to show the changes in the light pulses shape over time. It also revealed the laser's intensity and angle of inclination in much better detail than ever before.

"It's an achievement in itself," said Jinyang Liang, "But we already see possibilities for increasing the speed to up to one quadrillion frames per second!"

The team plan's to improve the system and break the record once again. The research has been published in the journal Light: Science & Applications.

At 250 MPH, This Strange Ride is the 'World's Fastest Electric Motorcycle'