This quadcopter drone is essentially a flying 3-D printer which can deposit material that hardens to form a sticky foam during flight.

Mirko Kovac of Imperial College London and his team have merged two technologies that are seeing rapid growth in the commercial world this decade - drones and 3-D printers. The quadcopter drone is essentially a flying 3-D printer which can deposit material that hardens to form a sticky foam during flight. 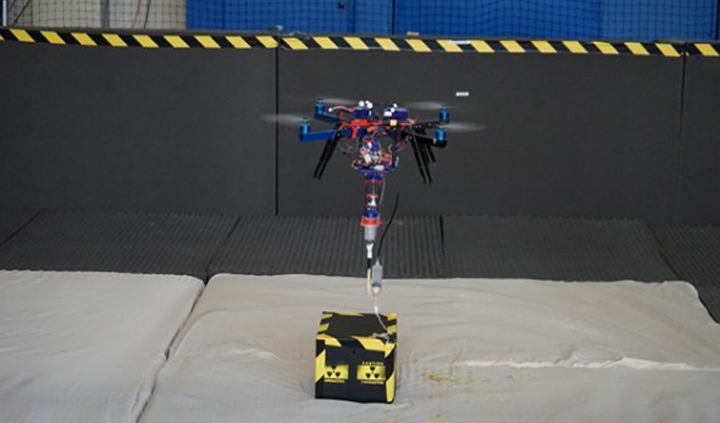 The inspiration has yet again come from nature and in particular, the swiftlet, a small East Asian bird which builds nests by depositing threads of its own saliva. Now Kovac and his team at the Arial Robotics Lab have turned drones into flying robotic swiftlets by attaching 3-D printer technology.

The flying printer carries two different chemicals that are kept separate and which produce polyurethane when mixed. A printer module is used to extrude the foam which hardens in the area it is deposited. The idea is that these robots can be used to remove waste from nuclear sites or patch up damage buildings and bridges without the need for time and effort of scaffold construction or dangerous harnessing.

The hexacopter can carry 2.5 kg, but scaled-up versions could carry up to 40 kg, says Kovac. At the moment the robots are battery powered by Kovac has stated his desires to operate them using a fuel cell which the robots could recharge themselves by perching in the sun and deploying fold-able solar panels. "They will build nests to recharge their batteries with solar cells and to observe the environment," he says.

The team are working towards total autonomy such that the construction plans are input and the printer drones set about their work using GPS coordinates and 16 infra-red cameras to be aware of its surroundings. The robots will also have to perform calculations to compensate for the changing weight of the device as foam is deposited. All the calculations are done by a nearby laptop which automatically sends the instructions wirelessly.

The merging of two such technologies has certainly provided this 3-D printer with a niche and it's interesting to see such solutions to particular problems.