Powered by solar, hydrogen, wind and water energy, the white catamaran will take six years to tour the world.

We have forever been trying to conserve energy and move towards a world that is less polluted and more environmentally friendly. Fossil fuels have been a leading cause of concern for environmentalists due to the alarming levels of pollution around the globe.

Not just roads but fossil fuels are increasingly used in waterways too due to which, the condition is moving from bad to worse. Now imagine a cruise ship in this picture that runs on hydrogen and solar energy!

Recent news brought hope to a lot of people around the world where a cruise ship developed by Victorien Erussard named Energy Observer caught the world’s attention. So, what is different about this cruise ship?

It runs on not one but two renewable sources and is now touring the oceans across the world by operating on these non-toxic energy resources. This entire circumnavigation is a way of verifying whether or not this ship can, indeed, sail effortlessly and without a hiccup on renewable energy resources without the use of any fossil fuels.

The ship works by eliminating the ions and salt from the water of the ocean and breaking them down into hydrogen and oxygen, that are its base elements. This hydrogen is then stored until it is required to run like a fuel.

As a supplement, there are also wind turbines and solar panels to run the ship.

The Energy Observer is being sponsored by Toyota and will be touring the world for a span of six years. It will be powered by solar, hydrogen, wind and water energy exclusively.

The plan is for the vessel to travel to fifty different countries during that time including Italy and Venice. 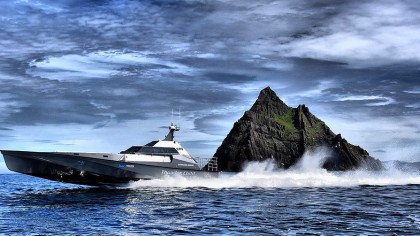 This innovative idea came to Erussard when he felt the need for an alternative source of energy to power vehicles. This happened when he was racing on his boat across the expanse of an ocean and suddenly ran out of power.

This event, five years ago, prompted the developer to come up with a concept that today, is quite a revolutionary event. Now, the catamaran is proudly sailing the world’s oceans on renewable and non-toxic energy.

The motive of Erussard and his comradery Jerome Delafosse is to successfully finish this entire trip solely on the energy generated by the wind, waves, sun, and hydrogen without the use of any fossil fuels.

Energy Observer has already completed more than 7000 nautical miles since the commencement of its oceanic voyage. The ship plans to take 101 halts while covering 50 countries in six years.

The vessel is also extremely light and noise-free, as opposed to MS Turanor PlanetSolar, which was the first boat ever to go on such an oceanic expedition.

The ship is currently circling the planet without the use of fossil fuels. If this voyage is successful, it could answer a lot of questions and resolve a lot of environmental problems in the near future.