Dutch company PAL-V prepares to bring the world’s first flying car to the market next year.

The production version of the flying car PAL-V Liberty has made its debut at the Geneva Motor Show in Switzerland.

The PAL-V Liberty looks more like a race car than an aircraft, according to automotive experts. The car has a narrow body and has two side-by-side seats on the front. The car features a tricycle design. The rotor necessary for the flying is at the top and unfolds.

Complies with both Europe and US

PAL-V will get its flying power from two Rotax aircraft engines. The car has been designed to comply with road and air regulations in both Europe and the US.

The rotor blades bow down and fold back when on the ground. The three-wheeled undercarriage will go down and bring down the ground clearance. When in car mode, the Liberty can easily fit normal roads and park in normal garages. The Pal-V Liberty has cabin capacity for two people.

It has a maximum take-off weight capacity of 910 kg. Its baggage capacity is 20 kg and has a fuel capacity of 100 liters.

The Liberty would need a take-off distance of 330 meters and landing roll distance of 30 meters. When in the air, the car would offer the highest speed of 180 kilometers per hour.

It can also manage low speeds up to 50 kilometers per hour. Maximum operating altitude is 3.5 kilometers. The vehicle can offer a flying range of 500 kilometers and has an endurance time limit of 4.3 hours.

The car has a dual engine design. One of them is for the road and one of them is for air. It is based on a gyroplane, which is a classic style of aircraft design. The PAL-V Liberty has also been certified to fly under European EASA and US FAA rules. 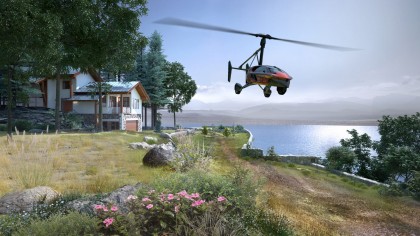 It also complies with road safety regulations. One would still need to have a pilot’s license to fly the PAL-V Liberty. The vehicle would also need a small airfield or airstrip to take off and land.

The vehicle can convert from flying to driving mode and the other way around in five to 10 minutes. But one would need to have enough room for the conversion to take place.

The PAL-V is priced at $400,000. The company plans to start giving keys the first pre-order customers in 2019, once it has completed all the certifications. The Pal-V Liberty Flying Car will be offered in two models, Sport and Pioneer. The company has been taking orders for the vehicle and plans to proceed with deliveries in 2019.