The Link "Blue Box" Trainer Flight Simulator was a world first. It is the great grandfather of all modern flight simulators and was made from scrap parts.

The Link Trainer, aka Blue Box or Pilot Trainer, was the world's first commercially built flight simulator. It was designed and built by Edin Albert Link in the 1930s and was based on revolutionary techniques and equipment pioneered by Edward in the late 1920s. 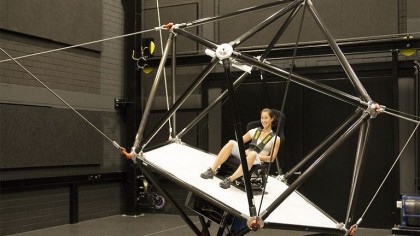 The Link Trainer would form an integral part of pilot training programmes the world over and was instrumental for the final Allied victory during WW2.

Who was Edwin Albert Link?

Edwin was born on the 26th of July 1904 and would grow up to become a pioneer in aviation, underwater archaeology, and submersibles. Edwin had his first flying lesson in 1920 and by 1927 he had obtained the first Cessna airplane ever delivered whilst making a modest living by barnstorming, charter flying and giving lessons.

In his youth, Edwin's father ran an automatic piano and organ factory, The Link Piano and Organ Company. By scavenging equipment from his father's factory, Edwin managed to cobble together an advertising plane.

This plane had a punched roll and pneumatic system from a 'player piano' to control a sequence of lights on the underside of the wings to spell out advertising messages. He added a set of small but loud organ pipes, also controlled by the roll.

Using the skills he'd learned making his advertising plane Edwin saw the potential for making a ground-based replica aircraft that could be used for training purposes.

And so, in the 1920s he began work on his Link Trainer - "a fuselage-like device with a cockpit and controls that produced the motions and sensations of flying." The majority of the pneumatic system for his first prototype was directly adapted from the one used in his father's organ factory.

Astonishingly Edwin demonstrated how to reverse the process in the 1970s by scavenging parts from a disused trainer to rebuild one of his father's Link Pipe Organs. In 1929, Edwin, seeing the potential for his new device, founded the Aeronautical Corporation to begin mass production of the Link Flight Simulator and Trainer.

Despite the obvious utility to the Airforce and Navy, his earliest customers were amusement parks that used them as rides rather than training equipment. It wouldn't be until the mid-1930s that the United States Army Air Corps saw the potential for the trainers and bought six units.

During World War II, more than half a million airmen were taught by the Link Trainer.

For his contributions to aviation, Edwin Link was awarded the Howard N. Potts Medal in 1945. By 1953 he had also founded The Link Foundation that still provides grants and fellowships in the fields of aeronautics, training and simulation, oceanic engineering and many more.

Link, in 1958, merged his company with the General Precision Equipment Corporation and took up a position as its President. He served in that capacity until stepping down to devote his talents to underwater research.

In 1967, he was inducted into the National Aviation Hall of Fame. Edwin later died on the 7th September 1981.

What was the link trainer-flight simulator?

Edward Albert Link's flight simulator was a world first at the time of its creation. It consisted of a replica airplane cockpit with a full complement of controls and instruments the pilot would expect to see in a real aircraft.

These trainers were needed to provide a safe way to teach new pilots how to fly using their instruments, learn how to understand the radio range for determining an airplane's position in instrument flight conditions and a subsequent let-down to a field for landing.

Edward's first flight simulators would go on to become world-renowned during the second world war as they were used as vital pilot training by almost all combatant nations of the day.

It is estimated that no less than 500,000 new and experienced U.S. pilots were training on Link flight simulators, many at the Naval Air Station Fort Lauderdale.

Link's pilot trainer has since been designated as a Mechanical Engineering Landmark, by the American Society of Mechanical Engineers. The Link Company is now a part of L-3 Communications and continues to make aerospace simulators.

Today a well-preserved Link Trainer can be found at the NAS Fort Lauderdale Museum. This machine also has an interesting story of its own.

Captain Carl Bork (a former Naval Aviator) found the simulator in Long Island, New York. He immediately purchased it for the museum.

"It was retrieved by Davie Police Officer Mike McGee, who traveled to Long Island and then delivered it to the Museum in August 2007. It was restored by Navy reserve volunteers in 2008." - NAS Museum.

The Link Trainer was vitally important to the U.S. war effort

Thousands of women and men who would later serve in the U.S. armed forces during WW2 received some of their training at the NAS Fort Lauderdale. This facility was primarily tasked with training pilots and navigators for the Navy's highly capable Grumman Avenger TBF/TBM torpedo bombers.

This aircraft, the bane of the Imperial Japanese Navy, was one of the first aircrafts to feature a revolutionary wing-folding mechanism to maximize the storage capacity.

The bulk of this training was performed at Lauderdale's "Link Trainer Building #8" which had a compliment of 6-8 Link Trainer Flight Simulators throughout the war.

Ensigns would undergo a grueling training schedule in flight controls and navigation (depending on their later role) on these simulators. Interestingly George H. W. Bush Sn. (Former U.S. President) was instructed on these machines before being assigned to the ill-fated crew of the lost Flight 19.

After the war, Link would continue to develop his trainers' by adding advanced gunnery and navigation to the mix. These upgraded trainers would ultimately lead to the development of the first jet bomber simulators in the 1950s.

Later, sophisticated electronics and digital computers were added and eventually led to simulators in which the astronauts in the United States’ Space Program trained.

How pilots were trained in the "Blue Box" flight simulator

Each Link Trainer was mounted to a base that allowed the main body (often in the shape of miniature aircraft) to turn, tilt and even 'bounce' under the direction of a nearby instructor. The instructor, who sat at a desk adjacent to the trainer, was able to control the simulator to create situations like extreme 'turbulence' and other simulated instrument flight conditions.

The same instructor also transmitted radio signals into the pilot's earphones. To maximize trainee immersion each trainer came with an opaque canopy to focus their attention on their instruments.

Each trainee pilot was put through a series of scenarios whilst strapped into the trainer. The pilot "flew" the Link Trainer through various turns, climbs, and descents, and the link's "course" was traced in red ink by the remote "bug" on a map on the table.

This hard-copy record of their performance was then studied by the instructor and trainee who could visually see a plotted red-line course of their last exercise. This proved to be a very useful way of identifying their competencies and areas in need of improvement.

It should be noted that each Link Trainer lacked air conditioning. Although not necessarily a problem in cooler climates, in hot U.S. States, like Texas, they got pretty hot inside. Many a young trainee almost 'crashed and burned' - not from lack of flying skills, but from the heat!

The Link Trainer's simulated movement was created using a series of vacuum operated bellows in the base. These were controlled by a series of valves that were, in turn, connected to the simulators control wheel or stick and rudder pedals in the 'cockpit'.

By using their instruments and radio signals received from the instructor, each trainee was required to fly through a navigational course (that was being plotted as we have seen). Slipstream simulators gave the controls the feeling of air passing over control surfaces, and a rough air generator added additional realism during the 'flight'.

Erwin Link's Trainer came in a variety of forms

Between the 1930s and 1950s Erwin developed a few models of the Link Trainer. These were sold to various nations between 1934 and the late 1950s.

Each new iteration of the flight simulator incorporated the latest developments in flight instrumentation and flight dynamics of aircraft of the times. Despite this, they all retained the basic electrical and pneumatic design fundamentals pioneered in the first Link.

1. Pilot Maker (C-3) - The original Link Trainer, it was used between 1934 and the early 1940s. This one is characterized by its tendency to have a bright blue fuselage and yellow wing and tail sections.

2. Army-Navy Trainer model 18 (ANT-18) / D2 - This would be the most prolific of Erwin's simulators. Models produced for the Royal Canadian Ari Force and RAF varied slightly and were designated the D2 not ANT 18.

This model could rotate through 3-axes, had excellent flight instrumentation simulation and could simulate extreme conditions like a pre-stall buffet, over-speed of undercarriage and spinning.