The Creator robot can make 400 hamburgers per hour without any human assistance.

Get ready to eat burgers made entirely by a robot. A new burger store in San Francisco has done away with people and is introducing a fully automated burger making machine.

The Creator Storefront restaurant will be host to the Creator robot that can grind beef, cook it to order, slice the buns, and assemble toppings. The robot is the flagship product of the culinary robotics company of the same name.

The company claims you won’t be able to tell the difference between a robot made and human-made burger and that its machine actually improves on everyone's favorite junk food.

“Every burger is created with freshly ground beef that’s aligned perfectly to your bite — a new kind of tenderness. We grind, slice, grate, toast, season, grill and customize a burger that’s fast, fresh, delicious and unforgettable,” says the company.

The Creator robot looks like a miniaturized factory. It is constructed from a series of computers and sensors that collaborate to push the raw ingredients together to get a fully formed and cooked burger on the other side.

The game-changing device has 20 computers, 350 sensors, and 50 actuator mechanisms stuffed into the 4.2 meter long machine. The Creator robot does all its burger-making tasks including toasting brioche buns to spreading condiments without any human assistance.

A hamburger takes roughly 5 minutes to produce, and in time, the company is aiming for the Creator to be able to make about 400 burgers per hour. Founder of Creator, Alex Vardakostas thinks robots entering food production is inevitable.

“When I started this process eight years ago, there wasn’t the inevitability that this would happen with food. Now not only is it inevitable, but it also produces a much higher quality product,” he says. The hamburger flipping robot took more than 9 years to develop. 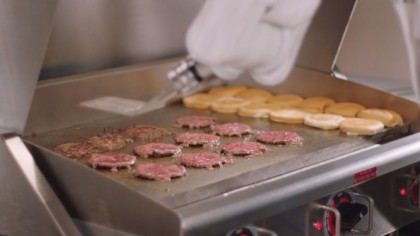 Vardakostas isn’t afraid to discuss the inevitable topic of robots taking jobs. He told online media that he had no qualms about making a robot that would replace people and that it was simply part of the process of business becoming more efficient.

"Food and commodities prices have been decreasing decade over decade. Interestingly though, food prices seemed to have tailed off around 2000. Farmers and tractors did amazing things for society in general, and this feels like the next advancement to bring dramatic reductions to the cost of food while increasing its quality and consistency," he said.

It uses high-tech sensor and movements to do things humans can’t do. For instance, Creator uses advanced sensors to cook the hamburgers to perfection.

Human cooks tend to overcook hamburgers to err on the side of caution, but Creator only uses data, so every hamburger is treated individually.

Try a Creator made burger at its store in San Francisco's South of Market neighborhood for a very reasonable $6.