Son Doong Cave in the Phong Nha Ke Bang National Park in the Quang Binh province of Central Vietnam was found by a local man in 1991.

Just beneath the ground on the border of Laos and Vietnam the world’s largest cave sat for much of human history until in 1991, a local man stumbled across something unusual…

He heard a whistling sound coming from a steep entrance to what appeared to be a regular cave. Due to the precipitous entry, locals didn’t dare try to enter the cave and simply left it at that. Despite its curious allure, the cave sat for another 18 years until in 2009, a group of cavers from the British Cave Research Association conducted a survey. What they found shocked the world.

The cave that the local man had found in 1991 is now known as the Son Doong Cave which sits in the Phong Nha Ke Bang National Park in the Quang Binh province of Central Vietnam. This system was discovered to be the largest known cave by cross-section in the entire world. The entire subterranean structure is thought to be between 2 and 5 million years old and it holds a treasure trove of wonder.

A fast flowing cave river runs throughout the cave supplying a steady supply of nutrients to thousands of species of cave plants and animals. It’s this lush vegetation that gives the world’s largest cave a such sumptuous appearance.

The Son Doong Cave system is estimated to have a volume of 1.36 billion cubic feet. For reference, that means by volume alone, the cave could fit over 35 Empire State buildings beneath the surface of the earth. It stretches more than 5.5 miles (8.85 km) long that we know of and the tallest point is 660 feet high (201 m). In total, cavers have been able to document over 150 connected caverns each with ecosystems all their own.

Two portions of cave ceiling have collapsed sometime in its history, estimated to be about 300,000 years ago, melding both the surface world with the subterranean wonderland. Coupling this with the sheer size of the cave and you are left with one of the most alien-like places on earth.

In terms of formation, the Son Doong cave is known as a solutional cave, which means that the structure is made completely out of limestone, specifically Permo-Carboniferous limestone, that was shaped by water movement. The formations themselves are still being shaped by the fast-moving river that flows throughout.

This alien-esque ecosystem yielded researchers with species of cave plants found nowhere else in the world. Thanks to the collapsed ceiling structures, monkeys, bats, frogs, insects, bunnies, nearly all the local fauna can be found living in this massive cave as well. This cave has its own unique ecosystem, so large that clouds form in the caverns that let off light mistings.

Naturally, in a cave this large filled with water movement, it contains rock formations like stalagmites. The Son Doong Caves are home to the largest in the world, standing up to 265 feet (80.7 m) tall. That’s only 40 feet shy of the height of the Statue of Liberty. Again, all held peacefully underneath the surface of the earth.

Don’t think that these stalagmites don’t have room to grow though, they’re barely half the height of the tallest ceiling span in the cave system… 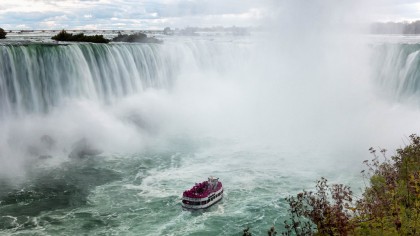 The Cave of the Winds: The History of One of Niagara Falls’ Biggest Attractions

One of the most alluring aspects of the cave apart from its mystifying nature is just how hard it is to reach. Currently, only a local company by the name of Oaxalis Adventures takes antsy visitors into the cave system. Tours have been running since 2013, before which experts were busy mapping out the system and studying the subterranean life.

In order to protect the caves’ one-of-a-kind natural architecture and wonder, only 10 cavers are permitted per expedition, which only run twice a week from February through August each year.

Ultimately, this secluded terrestrial paradise is filled with remaining mysteries. Researchers have been unable to find the exact source of the large river that shapes the inside of the cave leaving question as to the existence of even more caverns.