German company Max Bögl Wind AG just finished construction on the world's largest wind turbine, its one of four smaller turbines with the ability to power up to 1000 homes.

Wind turbines are becoming more and more commonplace as sustainability shifts into focus for many nations infrastructures, particularly in Europe. In fact, a poll conducted in the UK found that 73 percent of the British public supported onshore wind-farms.

Now, the world’s largest Wind Turbine has been constructed by German company Max Bögl Wind AG, which specializes in building some of the world’s tallest turbines. Notably, Germany is third in the world (behind China and the United States) for wind power added each year.

Size-wise the turbine ‘hub’ is 178m (584ft) tall, and the tower’s total height – to the tips of the extended upward blades – is 246.5m (809ft). For every added meter in height, the annual energy output is upped by 0.5-1 percent due to lower turbulence and stronger, more consistent winds. This leads to fewer interruptions in generation.

"The foundations of the four most powerful wind turbine generators will be used as upper reservoir for this purpose. They are connected via an underground penstock to a pumped-storage hydro power station in the valley that can provide up to 16 megawatts in power. The electric storage capacity of the power plant is designed for a total of 70-megawatt hours," described the company website.

The water battery aspect of the project is what gives these turbines extra height. The 40m (131ft) tall water towers are included in the construction of the turbines and are higher altitude reservoirs that are a part of a pumped storage hydroelectric power station located 200m below the turbines. The wind power will force water against gravity to store it in the reservoirs.

This water will then be used to drive an electric current, with the storage plant able to store water or produce electricity in 30 seconds. It's a successful pairing of energy generation with energy storage. The quartet of turbines is expected to power up to 1,000 homes at a time.

With this success, competitors are looking to build even taller towers. Vestas plans on building a prototype which stands at 241m (790ft) next year. 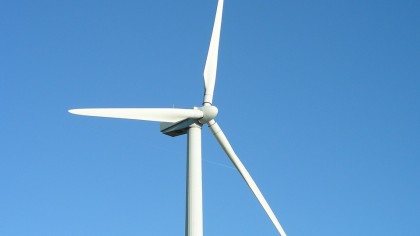 Germany might just speed ahead of the United States in wind power, especially after the proposed cuts to renewable energy that is a part of the U.S. Republican tax bill, threatening expansion of groups like Vestas in America.

"The proposed House tax bill could have detrimental effects on market volumes and prices if passed; at best Wind stocks face increased near-term uncertainty," according to Barclays analysts, adding Vestas and Siemens Gamesa shares should be most affected.