It is a well-known fact that with aging and mental health issues comes a loss of memory. However, so far little has been done to target this issue.

Now, researchers at Toronto's Centre for Addiction and Mental Health (CAMH) have developed novel therapeutic molecules that show promise not only in reversing the memory loss linked to these issues but also in renewing the underlying brain impairments.

"Currently there are no medications to treat cognitive symptoms such as memory loss that occur in depression, other mental illnesses, and aging," said Dr. Etienne Sibille, Deputy Director of the Campbell Family Mental Health Research Institute at CAMH and lead scientist on the study.

The development was not easy to achieve. In fact, it took several studies and stages to deliver these therapeutic molecules.

Sibille and his team began their work by first identifying the specific impairments to brain cell receptors in the GABA neurotransmitter system as well as the mood and memory symptoms they caused in depression and aging. Once this research had been done the researchers could specifically target molecules that would activate the impaired brain receptors responsible for memory loss.

As such, the team engineered new small but powerful molecules which were chemical tweaks of benzodiazepines. These therapeutic molecules were created to bind to and activate the GABA receptor target essentially "fixing" any related impairments.

The effects during tests were nothing short of impressive. A single dose of these new molecules administered in preclinical models of stress-induced memory loss was able to return memory back to normal levels in just 30 minutes. The experiment was undertaken more than 15 times always with the same results. 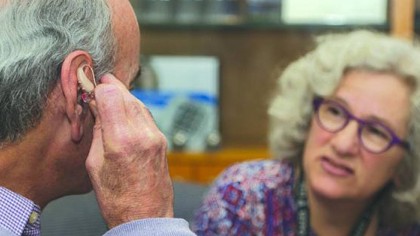 New Study Finds Memory Loss Could Be a Sign of Hearing Loss, Not Alzheimer's

In another experiment, the researchers were able to improve memory performance by 80 percent, essentially reaching levels seen in youth or early adulthood. Better yet, the significant improvement could be maintained for two months with a simple daily treatment.

"The aged cells regrew to appear the same as young brain cells, showing that our novel molecules can modify the brain in addition to improving symptoms," said Sibille.

"We've shown that our molecules enter the brain, are safe, activate the target cells and reverse the cognitive deficit of memory loss."

Sibille hopes to begin testing the molecules in clinical research in two years. If these next steps prove successful the potential applications of these therapeutic molecules are broad and crucially important.

For starters, they could fill the gap in cognitive deficit treatments in mental illness. However, furthermore, the molecules could go beyond treating depression and aging to even target brain disorders such as Alzheimer's disease.

The latest study of this ongoing research is published in Molecular Neuropsychiatry.

Jeff Bezos Is Funding a Lab to Extend His Life