While many scientists, researchers, and technical companies exhaust their efforts into harnessing clean, natural sources of energy such as solar, wind and tide, a Purdue University researcher has managed to develop a thermoelectric fabric that can harness human body heat to power Internet of Things (IoT) devices.

Are you one of those people who always get hot flushes even under baltic conditions? A latest technological breakthrough suggests that you can use those abnormal rises in body temperatures to power your IoT devices.

Kazuaki Yazawa, a research associate professor at Discovery Park's Birck Nanotechnology Center at Purdue University, has devised a thermoelectric fabric that can harness a person's body heat, turn it into small amounts of electricity which can then be used to supply power to electronic devices. The new technology uses semiconductor strings integrated into a fabric material that absorbs heat from any direct point of contact and generates power from that source. 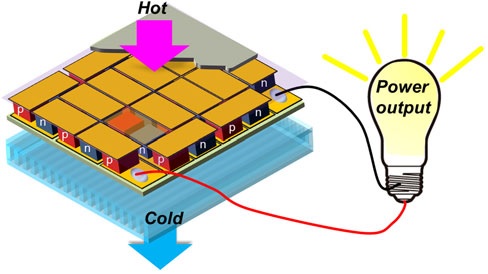 The uses and applications of thermoelectric fabric

Some of the promising applications of this technology are by using it in clothing materials which are ideal as it has a large surface area that covers the body with a good source of heat. The thermoelectric fabric can also be wrapped around simple and complex shapes that produce waste heat such as coffee cups and chimneys. Yazawa also enumerated some medical and athletic applications for his technological invention that would benefit tech wearables.

"Heart monitors, respiration and perspiration monitors are very useful for the elderly or those recovering from a trauma. There also is a huge market for wearables in sports to optimize human performance. If you have a patient or an athlete who is overheating, real-time information of their vitals could be used by coaches and medical professionals to better monitor and treat their players or patients. These types of devices need energy to be actively charged so they can be used continually", says Yazawa.

When heat is harnessed, the opposite condition takes effect like cooling. "Anything that takes heat and converts it to another form of energy is also providing a cooling effect. Therefore, this technology also could provide a continuous cooling treatment", said the research professor.

"This could be especially beneficial from a sports or military perspective. The flexible substrate could be applied to undergarments and when athletes are running the technology could help give that little bit of charge."

Other researchers have also attempted to use heat and converting them into energy that can be put to efficient use.

The human body only produces low heat flux and therefore needs a thicker layer of thermoelectric elements, more than an inch, to be able to generate substantial power output. Having the thermoelectric fabric with large dimensions would restrict human body applications as it won't be flexible and cannot mold to the required three-dimensional shape.

Yazawa explained that using a weaving technique will reduce the thickness of the thermoelectric fabric. “Lengthening the threads and using a unique combination of insulation makes the generator more flat and manageable". This would allow the fabric to be more flexible and dense and more suitable for complex applications.

This type of technology could potentially eliminate the need for using unsustainable power sources such as batteries.