These 10 Are the Best Engines for 2018, According to Wards Auto

Here are the winners of Wards Best Engines of 2018. This year, EVs and mainstream brands dominate with V8 returning to the list.

Each year, automotive enthusiasts anticipate the list of best engines from Wards Auto. The list in itself is considered to be an industry benchmark for recognizing exceptional engineering and technological developments made to build high-performance, energy-efficient powerhouses. 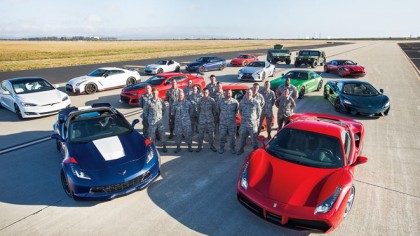 Automakers around the world compete vigorously but only a few made it to the list. The test itself consists of numerous objective and subjective criteria to evaluate the engine performance, considering everyday driving situations. From power and torque output to NVH (Noise, Vibration and Harshness) levels, efficiency and overall technical relevance, the test keeps on becoming more challenging each year to set the values even higher for a benchmark engine.

The results for 2018 are out and it reflects Wards' idea of choosing some of the most outstanding powertrains that truly deserve to be recognized. As such, the list has got only two luxury brands Infiniti and Jaguar, while smaller turbocharged engines, EVs and Hybrid systems have dominated the list.

Here are the winners of Wards Best Engines of 2018. Note that the vehicles considered for the list have a base price lower than $63,000 USD.

Chevy Bolt is arguably one of the best EVs in the price range of $30k. With multiple mechanisms such as inverting, energy regeneration, heating and cooling, the 150kW electric power unit gives Bolt an impressive 238-mile range on a full-charge, along with the ability to provide strong torque and quick acceleration. This all-electric subcompact hatchback is not only priced right, but is equally capable of providing the right kind of driving experience compared to other EVs in the range.

The first electric minivan, Chrysler’s Pacifica Hybrid according to Wards is a stroke of a genius. The 3.6L Pentastar V-6 engine is optimized by adding Atkinson cycle and combining it with a 16kW battery pack that’s capable enough to provide 33 miles on a single charge. Combining the engine and battery power, the Pacifica Hybrid delivers a driving range of 566 miles per charge and fill.

The popular EcoBoost engine from Ford is impressive in many ways. With a power of 325 horses, seamless start/stop functionality and vibration-free idle, the 2.7L turbocharged V6 engine is one of the best-selling engines for the F-150 lineup. Replacing the older direct-injection engine with the newer port and direct-injection technology, the engine pairs with 10-speed transmission that provides unparalleled performance to the truck.

Ford’s legendary V8 engine made a return to the list for its impressive power and revs that are completely reworked for 2018 Ford Mustang. The new dual-fuel, high-pressure direct injection and low-pressure port fuel injection delivers low-end torque with high-rpm power along with improved fuel efficiency. The optional Active Valve Performance Exhaust further allows to adjust the engine note from normal, sport, track and quiet modes.

The fuel cell electric propulsion system lets Honda Clarity to travel 47 miles on a single charge. Combine it with the 1.5L 4-cylinder engine and it gets an overall range of 340 miles. It generates electricity through the chemical reaction between on-board Hydrogen and Oxygen from the air, leaving water as a byproduct with no tailpipe pollution.

Honda’s only powerful engine sold in North America also found its place in the list. The turbocharged 2.0L VTEC engine churns out 306 hp and 295 lb-ft of torque with an estimated 22-28 mpg fuel efficiency. The engine on Type R is fine-tuned to deliver maximum performance, setting a record for a front-wheel-drive production car to complete the Nürburgring in 7 minutes and 43.80 seconds.

The exclusive 3.0L twin-turbo V6 residing within the Q50 Sport trim is tuned to churn out 400 hp at 6,500 rpm and 350 lb-ft of torque at merely 1,600 rpm with the help of quick-spooling compressors. The engine although not too efficient, makes it competent against the German sports sedans. As such, the engine remains one of the biggest assets for the Q50, living up to the “Sport” expectation.

The low-output variant, Ingenium 2.0 L engine from Jaguar XF made to the list for its unique electrohydraulic valvetrain that gives confident cruising and plenty of power for every situation. The engine produces 247 horsepower and 269 lb-ft of torque, making the engine in line with the 4-cylinder turbo, luxury sedan segment. The company is also planning to develop plug-in hybrids and EVs for the future.

3.3L twin-turbo V6 from Kia Stinger got an entry in the list for the first time. This remarkable engine delivers 365 horsepower and a staggering 376 lb-ft of torque at only 1,300 rpm. The engine is designed to be used for both Stinger and Genesis G80 Sport. Engineers at Kia have compared their engine to BMW’s much successful B58 3.0L 6-cylinder engine, which couldn’t make the list this time.

Toyota also made to the list, but this time it’s not Prius. It got the entry for its 2.5L hybrid engine running on Atkinson cycle that churns out 208 horsepower, giving 51-53 mpg. The new battery pack and a refined engine that mates with a CVT transmission provide a reliable performance to the Camry and also provides a strong resale value.