These 10 Construction Projects are Amazing Feats of Engineering

We've collated ten of the most amazing constructions in the world for your perusal. They range from large scale civil engineering projects to some of the most incredible buildings in the world.

Construction and civil engineering -- without it, the skylines of major cities would look depressing and flat. Within the last century, bridges, buildings, and roadways have become functional works of art. Here are our top 10 picks for the best in the world. We've limited our choices to those built within the last 100 years or so.

The following are far from exhaustive and are in no particular order.

Let's kick things off with one of the most amazing constructions in the world. This is an incredible feat of engineering. The Hong Kong to Zuchai to Macau Bridge system is an ongoing project consisting of bridges, artificial islands, and tunnels.

This is one of the coolest buildings on the planet. You could even argue it's one of the most beautiful buildings in the world in its own way. This building serves as the China Central Television Headquarters. Ground broke on its construction in September of 2004 with the facade completed in 2008.

The building was designed by Rem Koolhaas and Ole Scheeren of OMA, ARUP were recruited for the complicated engineering bits. This amazing building stands around 234 meters tall over 54 floors.

This amazing construction project in Libya is probably the biggest irrigation project in the world. It sits underneath the Sahara desert and consists of 2800 km of pipes. These pipes connect 1,300 wells and transport around 6.5 million cubic meters of fresh water every day.

The project began in 1985 and is currently still ongoing. The bulk of its funding has come from the Libyan government. The project is set to be completed in or around the year 2030.

The final building will consist of 117 floors with 18 elevators all serving 300 apartments. The building's construction is the responsibility of Lodha Group, one of India's most accomplished construction companies.

The Burj Khalifa is one fo the record books. Not only is this a very striking building in its own right, but it is officially the worlds tallest man-made structure. You could even argue that it is one of the most famous buildings in the world too. It towers over Dubai at an impressive 830 meters tall. The skyscraper was designed to be the centerpiece of the surrounding mixed-use development.

This development consists of tens of thousands of homes, hotels, parks, residential towers, mall and even a man-made lake.

No list of amazing constructions would be complete without this incredible feat of engineering. They're also one of the most famous construction projects in the world and are quite beautiful.

The entire project required the dredging of enormous amounts of sand, as well as large amounts of concrete supports to form the island(s). Palm Island is a truly outstanding example of what mankind can achieve when we put our minds to it.

Not only is this one of the most amazing constructions in the world, but must be one of the top 10 most beautiful buildings. The hotel was designed by Atelier Enam who based it on a nautical theme. The project's centerpiece is the aerodynamic hotel itself that overlooks the Java Sea.

You'll not be surprised to hear that the hotel is five-star one. It also offers an aqua park on the reclaimed land the complex stands on.

North China consists of around 50 percent of the population of China but only 20 percent of its total water resources. To balance things out a bit, China has spent the last 15 years building a series of canals to transport water to where it's needed.

The central canal was completed in 2014 with two more currently under construction. Once complete the entire system should transport around 45 billion cubic meters of fresh water each year.

Stretching over an approximate 77,000 km of roadways, the U.S. interstate project has been one of the longest and most expensive construction projects in modern history. It is by surely one of the most amazing constructions in the world. The project was initiated by Dwight D. Eisenhower to serve a dual purpose. 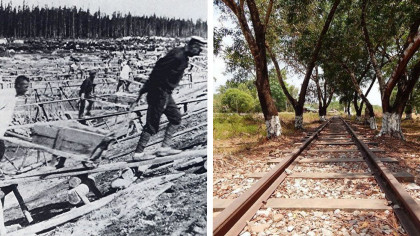 The first was to improve the ability of domestic military forces to respond to emergencies but also drastically improve the U.S. economy. Especially to improve shipping and general transportation across the country. Construction began in 1956 with the final piece completed only as recently as 1992, the I-70 through Colorado. Though it could be argued this is going to be an ongoing project for the foreseeable future.

Songdo is an entire business district built on entirely reclaimed land. The nature of this project makes it one of the biggest in the history of mankind and a significant investment in labor and money. The entire project was completed in 2015 to provide a mixed-use site of tens of thousands of homes, office space and retail space.

Funding was provided by U.S. Real Estate companies as well as South Korean industrial companies. The entire site has built-in Wi-Fi as well as automated recycling systems and other modern innovations.

So there you go -- 10 of the most amazing constructions in the world. Have we missed any? What would you have included?

These Are the World's Speediest Trains