Though the Bitcoin craze has died down, multiple companies are still very interested in applying blockchain technology to their products and services.

Bitcoin as well digital currencies have caught the attention of individuals, businesses, tech companies, and governments across the world. Catching fire at the beginning of last year, bitcoin demonstrated unprecedented growth, peaking at around $20,000 per coin before dropping off at the end of 2017. Though Bitcoin and its fellow cryptos have not performed well this year, there is still a strong interest in the underlying technology that powers bitcoin, blockchain.

What is blockchain you ask? In short, a blockchain is a database that is validated by an open community rather than one centralized authority. In this open-sourced digital ledger system there resides a collection of transactional records. All of these transactional records are part of a "block" linked together to other blocks with a hash function. As new records are created in the system, they are confirmed by a distributed network of computers and are then paired with the previous entries in the chain, hence the term blockchain.

The financial industry is not the only place that could benefit from blockchain. Education, music, cloud storage, and forecasting are just some industries that can benefit from the technology.

Due to the vast application of blockchain, various companies are eager to apply blockchain technologies to their products and services.

Based in California, Security Frist Corp is a data security and information assurance company. The IT company focuses their services on developing advanced data-centric cybersecurity solutions by using the most "powerful industry standards" alongside unique cryptographic splitting capabilities. Currently, the company owns over 250 patents for software-defined data security. Some of the patents are related to security blockchain programs. Blockchain could further help enhance cyber-defense as the blockchain system can easily prevent fraudulent activities via the consensus mechanism.

It is no secret that Microsoft is very interested in blockchain technology. 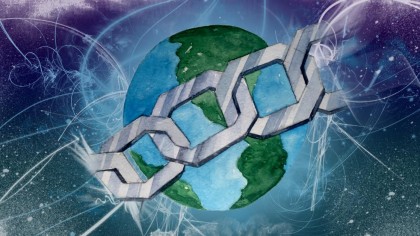 Microsoft believes that a blockchain system can help businesses increase efficiency and speed, simplify operations by reducing cost and time related to reconciliations and disputes,  and potentially enable new business models increasing revenue and savings. Microsoft has recognized the disruptive capabilities of the new technology and even plans to inject blockchain into some of the company's future products. The company currently has over 40 blockchain patents filed.

The massive American company is excited about the limitless financial opportunities that come with blockchain technology. With fourteen patents filed, the company wants to work towards tackling the issues of scalability and privacy.

Client-server based information systems and the current issues with the systems put into place could be solved with new developments in blockchain. As one of the world's largest telecommunication, Qualcomm believes that the transparency, as well as the security of blockchain systems, could help alleviate these current issues in the client-server based information systems. Qualcomm has well over 20 blockchain patents filed at the moment.

The Canadian based bank is one of the first banks in Canada to push for the adoption of blockchain technology and the use of digital assets. Filing 20 blockchain patents, the bank hopes to use blockchain to create more secure and more economical banking services.

With almost 30 blockchains filed, Mastercard has invested a lot of resources into implementing blockchain into their services. As stated by Mastercard, the company hopes to create new commerce opportunities for the digital transfer of value by allowing businesses and financial institutions to transact on a distributed ledger.

Holding one of the largest amounts of blockchain patents, at 43, Bank of America hopes to use open-sourced ledgers to create more efficient financial transactions for consumers and business. Though the company is in the process banning cryptocurrency purchases on credit cards, Bank of America hopes to use a series of blockchain products in the near future.

Red Hat has created major leaps with other software companies to create new blockchain projects. In 2016, the open source solution company partnered Fintech startups and ISVs to help push the forward the adaptation of blockchain applications. Since then, the company has filed over ten blockchain patents.

Dell believes that blockchain is one of the most important technologies to come out in the last ten years. The company has set up "Practice of Blockchain" to help customers learn, understand, and adapt to blockchain to reduce costs as well as generate revenue.

The private banking company Medici Ventures has focused their assets on the adoption of distributed ledgers. Like many other financial companies, Medici believes that blockchain will advance the financial industry by advancing the efficiency, security, and transparency of the industry.

Similar to Microsoft, IBM has taken an interest in enterprise blockchain systems. An enterprise blockchain is a distributed ledger in which all the participants, and their digital identities, are known from one or many trusted organizations, where writes and read permissions are roles-based and usually requires the consensus of several participants, and where multiple algorithms are used for consensus. IBM currently has 27 patents filed. A few of the patents are related to the creation of blockchain enterprise systems.

Though blockchain is still in its early stages, the powerhouse Cisco hopes to fully maximize blockchain technology to serve a wide array of services including security. As stated by Cisco software engineer Robert Greenfield, "On a grand scale, it's going to be necessary for Cisco to really master blockchain technology, because it's bridging the gap between hardware and what Cisco as a company is transitioning towards, which is software and security."

Early last year, HP announced that they are working on a blockchain product that they intend to release in 2018. Filing eight patents, Hewlett-Packard plans to release a wide range of enterprise cloud-based services based off of the blockchain, called "Mission Critical Distributed Ledger Technology."

An American multinational telecommunication company, Lucent Technologies hopes to revitalize their business with new blockchain products. Currently, there is not much known about the products they intend to release to market.

To maximize the company's their own eCommerce platform for media owners, the company utilized blockchain technology. Dubbed "Monegraph Everywhere", the first professional- grade digital licensing application based on the blockchain. Monograph looks to utilize the distributed ledger to create new products.

Striving to be innovators in the world of blockchain technology, Accenture is investing tremendous resources into blockchain innovation to better understand the practical, real-world application. Currently, the company plans to release financial tools that use distributed ledgers.

Early in 2017, NEC joined Hyperledger to reinforce the company's commitment to the blockchain. NEC wants blockchain to be adopted globally but to do the NEC wants to invest in infrastructure and research that facilitates that growth. Currently, NEC, has seven blockchain patents filed.

Huawei believes that blockchain will disrupt the mobile industry and the company wants to use the blockchain to create better experiences for customers. As stated by Huawei, "Blockchain technology offers mobile carriers superb opportunities to support the transformation of business models through new network layers, which can revolutionize how data integrity is verified and value and rights are transmitted and tracked over the infrastructure to subscribers."

In 2017 Fujitsu Laboratories announced a series of products that are tied to utilizing blockchain technology. Dubbed, "ConnectionChain,"  the security technology that safely and easily executes exchanges and payments in different virtual currencies.