Engineers from Penn State are using a standard 3D printer to create the framework for printing living organs and tissues.

By  Shelby Rogers
Dec 13, 2017
A closeup of the cells grown on the polymer fiber created by the 3D printer Justin Brown/Penn State

Engineers continually push the limits as to what's possible with 3D printing, but normally the rigs being used in experiments are custom-built, massive, expensive, or any combination thereof. However, a team of collegiate engineers from Penn State created a framework to grow living tissue by using an off-the-shelf 3D printer.

The team combined additive manufacturing with another popular material in the industry -- hydrogels. They want to perfect a low-cost and efficient way to create 3D polymer fibers in order to create a framework for tissue engineering. However, to truly prioritize efficiency and low cost, the researchers are only using their 'hobbyist-grade' printer.

"We are trying to make stem-cell-loaded hydrogels reinforced with fibers like the rebar in cement," said Justin L. Brown, associate professor of biomedical engineering. "If we can lend some structure to the gel, we can grow living cells in defined patterns and eventually the fibers will dissolve and go away."

They use a tactic called electrospinning to produce superfine thin threads. These threads measure into the micron and nanometer range at the largest. Then the team demonstrated that cells would grow on these fibers. They then put the patterend fibers back into a collagen gel primed with cells for growth. 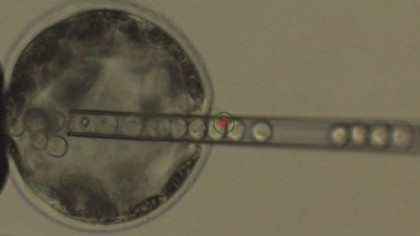 Right now, major organ transplant tissues come from donors. Every 10 minutes in the United States alone, someone is added to the national transplant waiting list. The transplant process can take too long for some patients. On average in the U.S., 20 people die each day while awaiting a transplant. There's always a risk that the body could reject a donor's organ entirely.

Bioengineers have been looking for ways to grow their own replacement tissues catered to the DNA and medical needs of a patient. This 3D printer could offer the "scaffold" that other teams could use further down the road to build living tissues like muscles or tendons or even cartilage.

The researchers from Penn State acknowledge that other innovations have been made in this field, and they credit those projects that came before them.

"The overarching idea is that if we could multiplex electrospinning with a collagen gel and bioprinting, we could build large and complex tissue interfaces, such as bone to cartilage," said Pouria Fattahi, doctoral student in bioengineering. "Others have created these combination tissues using a microextrusion bioprinter."

Those microextrusion bioprinters separately print the tissue with the bone or 'framework,' meaning that the pieces are printed individually and then adhered together. However, that's not how the body grows. Tissues like cartilage and bone grow together. It's that growth that the researchers are trying to duplicate.

Right now, the team has the most success with perfecting tissues smaller than 1-inch cubes. But for these engineers, small doesn't necessarily mean powerless.

"The anterior cruciate ligament, or ACL, is only about 2 to 3 centimeters (.8 to 1 inch) long and 1 centimeter (.8 inches) wide," said Fattahi, mentioning one of the most important ligaments in the human leg.

The team's work was recently published in the latest edition of the Journal of Advanced Healthcare Materials.