Artists are pushing the boundaries of materials and aesthetics in 3D printing.

By  Ruth Terry
Nov 04, 2017
This 3D-printed grotto was designed by architects Digital Grotesque

3D printing is poised to revolutionize industries as disparate as health care and robotics, with everything from making prosthetic limbs more affordable to facilitating the movement of soft robots. According to Redshift, research shows "that accelerating technological development will drive the 3D-printing market value from its current $3.8 billion to $16.2 billion by 2018." 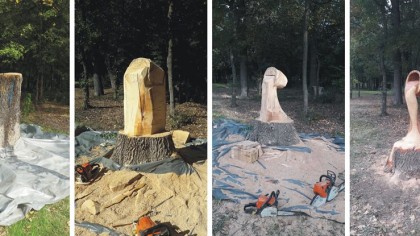 Exploring new materials will help spur that growth. Right now, most people with an interest in 3D printing are already familiar with the usual suspects: plastics, resins and metals. Innovators within the industry are also already experimenting with things like bio-based resins and graphite, a naturally-occurring carbon polymer.

1. Digital Grotesque was created by Renaissance men Benjamin Dillenburger and Michael Hansmeyer—both are architects, programmers and professors—whose passion is exploring the applications of computation to the design and fabrication of architectural forms. "Digital Grotesque" is the name given to "Grotto I" and "Grotto II", separate installations commissioned by the FRAC Centre in Orléans and the Centre Pompidou in Paris, respectively. Both structures feature algorithmically generated geometry, hundreds of millions of surfaces and, respectively, between 30 and 42 billion voxels, says the project website. Reminiscent of intricately-carved Church of the Sagrada Familia by Spanish architect Antonio Gaudí, each of these marvels is composed of at least five tons of sandstone, which took over one month to print. The video below explains more about their process:

2. Lorna Barnshaw is a UK-based artist whose series "Replicants" uses different platforms—e.g. Cubify, Autodesk software—to render mask-like sculptures of human faces. Some faces came out almost unrecognizably pixelated, while others have the soft-focus fleshiness of a Ruben's portait.

My 3D self-portrait. Quite the looker I say... #3d print #SquiezeShow #wsa pic.twitter.com/0w5V7TaoIH

3. Francesco Pacelli is an Italian artist who is working in partnership with WASP printer company to generate geometric 3D-printed ceramic forms. More than other ceramics techniques, such as hand-building or throwing, 3D printing allows designers to create absolutely identical items, which makes them perfect for consumer products, and clay is the ideal medium for use with liquids that are degraded by light. Watch the video below to see how Pacelli's prints clay into azure-colored perfume bottles with Art Deco lines.

4. Kate Blacklock is another ceramicist exploring the potential of 3D-printed clay.  Blacklock's vertebra-like forms, produced using a 3D Systems CeraJet printer, began life as drawings in Adobe Illustrator and were related to one of her painting series, she told 3Dprint.com. "One thing that surprised me was how much the actual pieces looked like the renderings. It’s different when you make things out of clay and you fire them and there are often surprises with the clay doing things that you don’t expect."

5. Eric van Straaten's "Flamingos", pictured below, is from his series "Odd Ducks" an eight-piece collection of multicolor composited 3D prints. Van Straaten combines images of youthful, elongated female forms with birds to explore themes of mythology, youth, femininity, freedom and even environmental issues. His website explains how flamingos have been pursued throughout history. In Ancient Rome, their tongues were eaten as a delicacy, and in the Andes their fat is considered medicinal. Van Straaten's sculptures range in price from €2,000 to 6,000, depending on their size.

6. Danit Peleg is using 3D printing to push the boundaries of an entirely different art form: fashion. Like many designer-artists in the fashion world, Peleg and her team are preoccupied with exploiting the unique characteristics of different materials to create wearable art. Recently, Peleg added another dimension to her work: the ability for customers to customize it.

"In the summer of 2017, Danit launched a customization and personalization platform on her website, enabling customers to personalize and order the world’s first 3D printed garment available to purchase online. In the future, as the technology improves, Danit envisions a world where anyone will be able to buy files and print clothes at home or at a designated store." Right now, many people will find it cost prohibitive. Customizing a jacket on Peleg's website will set you back about $1,500.

Married couple, Rob and Nick Carter make old art new again by interpreting it into 3D prints. Their bronze sculptures pay homage to the work of master painters like Vincent van Gogh and Giorgione. Below they brought an ink drawing—"The Heavy Trunk of an Oak, Sawn Off Horizontally Above Its Roots," which Dutch painter Jacob de Gheyn II completed in 1600—to life as a series of nine bronze tree stumps arranged in an outdoor installation at Kensington Gardens in England. The stumps were engineered using 3D scanning, printing and bronze casting methods.

You won't find these Pokemon-inspired planters and candle holders in a gallery, but we still consider them art, in a post-pop art kinda way. Produced by a mysterious maker named Tony from printed porcelain, and sold via Shapeways.com under the brand name Artsysaurs, we think Ceramic Bulbasaur encapsulates just as much cultural zeitgeist as Andy Warhol's "Campell's Soup Cans". And at about €45 a pop, they are far more affordable for the everyday art collector.

Via: 3DPrint, Redshift, Washington Project for the Arts