These 9 energy startups are hoping to change the landscape of the energy industry of the future. Good luck to them all.

From innovative energy generation systems to zero-carbon energy storage, these energy startups are hoping to change the future. Although they all have different solutions, they are all united in their mission to make the future cleaner and more efficient.

SEE ALSO: Is 100% Renewable Energy Enough For The World?

1. Get power from kites with Kite Power Systems

Kite Power Systems, as their name suggests, are attempting to generate energy using kites. Yes, you read that right, kites.

It seems this ancient piece of technology is re-inventing itself once again. Their CEO, Simon Heyes, has helped create the world's first commercial kite-driven power station solution.

Simon and the company believe this could well be the 'magic solution' to the world's energy problems.

Their system can be used onshore and offshore and, even better, without the need for government subsidies. Each installation consists of a set of kites flying in figure-of-eight formations at around 450 meters in the air.

Each pair of kites pulls a tether that subsequently turns a turbine to generate electricity to provide a continuous energy source.

“Kite can fly higher than a wind turbine and therefore reach higher winds,” Simon says (sorry we couldn't resist). Being kites they are also very easy to transport - you just fold them down.

Breezi wants to make HVAC systems more efficient by providing a low-cost solution for HVAC filter maintenance. They tout their products as 'fitness products' for such systems.

Whilst larger systems are likely to already have a sophisticated suite of airflow and other sensors integrated with a BMS; this device is aimed at those who don't. The little sensor can be inserted with ease into an HVAC's air filter and start providing useful monitoring information right away.

Breezi's AirPulse then uses audio sensors and AI to work out what, if anything, is going wrong with the clients HVAC system. It can also offer suggestions as to when the filter should be changed.

3. American Wind is making waves in the wind power industry

American Wind, as the name suggests, is hoping to make waves in the wind power industry. They have developed an innovative cubic wind turbine that promises to deliver nearly 1000 times more energy generation than a solar panel of similar size.

Their MicroCube wind turbine measures a measly 22.9 by 22.9 by 33 cms, but don't let its diminutive size fool you.

"The MicroCube™ is small, very small with the cube version of the turbine being slightly smaller than your standard basketball ( 9in cubed). But like laptops today, just cause its small doesn't mean it skimps on power. The MicroCube™ comes with a 1 Kilowatt generator which is getting big power from a small package. The other advantage of the small size is that we could put over 100 MicroCubes in the same footprint as some of our competitors." - American Wind.

Constructis is an interesting and innovative energy startup, not to mention unusual.

They have managed to develop a device that can collect kinetic energy from vehicles on roads as they drive over it. It's almost akin to an energy harvesting speed bump.

"CONSTRUCTIS is leading the kinetic energy revolution with a zero carbon emission roadway power system. Our Roadway Energy X (REX) platform is a rumble strip box buried in the roadway that harvests over 1,100 watts of electricity for every 2 axle car pass, enough to power 3 family homes with just 4 lanes of busy traffic installed." - Constructis.

Whilst the actual amount of energy it can harvest, is relatively small at the moment, if it were to be upscaled (and production costs reduced) it could prove to be a valuable addition to a cities' energy-mix.

This could be valuable in areas where cars need to slow down. In this sense, it could be used to harvest kinetic energy when it is generally being wasted on braking anyway.

Nostromo Energy is an energy startup trying to break into the energy storage business. They provide new and innovative, not to mention affordable, storage solutions by replacing Lithium-ion batteries with a much better alternative - water.

"While everybody is talking about global warming and Li-ion based energy storage, we have found a way to use water as a highly potent capacitor and solve the most crucial problem of electrical grids: high peak demands, which are wholly subjected to cooling demands, e.g., commercial chillers. We have developed the cleanest, safest, most cost-effective energy storage system available today and in the foreseeable future." - Nostromo.

Their Li-On alternative is called Icebrick. This is a modular thermal cell that is, so they say, 10 times more efficient in its energy storage than other alternatives.

It also comes with a warranty of 15 years.

SEaB is attempting to muscle in on the Waste-to-Energy (WtE) market. They have developed a system that can turn neighborhood or business waste into their own private micro-power plant.

Their two main systems, Flexibuster (for food waste) and Muckbuster (for agriculture waste) can fit into a shipping container and generate electricity and heat from stuff you'd normally just throw away.

The best part is that these systems can send electricity to its own dedicated microgrid to be shared amongst neighbors.

The company already has some contracts with the NHS in the UK who use it to make considerable savings that can be reinvested to where its needed - actual healthcare.

Not only do these systems help generate heat and power, but they reduce the need for being dumped. Win, win.

Weave Grid hopes to build a power demand response system for EV vehicle charging. With the larger uptake of EV vehicles of late, some neighborhoods have started to suffer from major overloads on grid gear when people plug their EVs into charge after work.

These chaps are planning to dynamically manage this issue and use any data collected to help residents make smarter charging decisions.

HST Solar is more mature than others on the list having been formed over 4 years ago. Despite that, they are planning to leverage AI to design utility-scale solar farms. 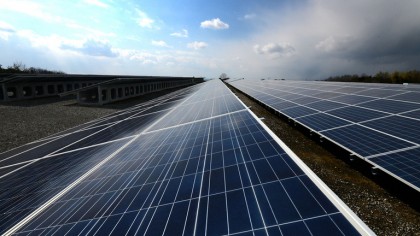 They hope to provide aid for solar developers to design the layout of the farms with greater ease. It allows them to be able to create the most efficient layouts on various terrains with multiple obstacles like trees or hills.

By doing this, according to the company's CEO and co-founder Santanov Chaudruhi, should decrease the costs of solar farm development by 10 to 20%. This will have a noticeable improvement on the farms ROI.

It should also, they believe, help developers win more tenders and lead to a faster development process; not to mention to save considerable time and headaches.

9. H2GO Power want to use hydrogen to store energy

H2GO Power, co-founded by Abo-Hamed, is an energy startup that is trying to develop a solid-state hydrogen energy storage method. They are, in fact, a spin-out company from the University of Cambridge.

Like many others, the company believes the future is in energy storage, not energy generation. Their innovation is to develop a low-cost and safe hydrogen production and storage solution.

According to their website, "Our mission is to bring affordable reliable energy to millions across the globe in a green way for large social and environmental impact".

Their solution is to store and use hydrogen gas that can be used in fuel cells, using nanomaterials, to create a sponge that traps hydrogen gas. This can then later be released for future use.

"Instead of a high-pressure cylinder, Hydrogen is stored as a solid-state carbon-free fuel with the release of hydrogen-on-demand through our patent protected catalyst. Energy distribution by solid-state fuel is an alternative to electrical and gas grid networks." - H2GO Power.

7 Smart Home Energy Monitors to Save Electricity And Cash

Why Maglev and Vactrains Trains Are the Future of Transportation