University of Chicago researchers taught three rhesus monkeys how to grab a ball with their brain power and a robotic arm.

A new study done by a team of US-based neuroscientists showcases how amputees can control robotic appendages -- even if they were missing a limb since infancy.

"That’s the novel aspect to this study, seeing that chronic, long-term amputees can learn to control a robotic limb," said Nicho Hatsopoulos, PhD, professor of organismal biology and anatomy at UChicago and senior author of the study. "But what was also interesting was the brain’s plasticity over long-term exposure, and seeing what happened to the connectivity of the network as they learned to control the device."

The team used three rhesus monkeys who had been rescued at four, nine and 10 years ago. The monkeys had to have amputations after suffering severe injuries; the amputations did not happen in connection with this study.

"We have successfully demonstrated that learning to use a cortically-controlled brain-machine interface to perform a complex, sequential task is possible in chronically amputated animals," the authors said in the study published earlier this week in Nature Communications.

The team then went about the task of training monkeys to reach for and want a ball. The catch? They had to move a robotic arm with only their thoughts to retrieve the ball. The team assigned brain cells to control reaching and grasping the arm as the monkeys were trained. The monkey with the implant on the opposite of the brain initially figured out how the arm worked faster. However, all monkeys eventually figured it out.

What really stunned researchers was that the actual composition of the brain changed and adapted to control the limb. The researchers documented the same neurons changing over 40 days as the monkeys became more comfortable with the robotic arm.

"The amputee animal had very few connections [between neurons]," study author Karthikeyan Balasubramanian, University of Chicago researcher, told Gizmodo. "As it was learning, the network became denser and denser." 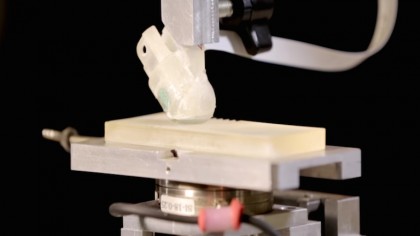 Not everyone was impressed. In an interview with Gizmodo, biomedical engineer Miguel Nicolelis of Duke University said that the research "did not make any substantial new contribution to the field of brain-machine interfaces," in an interview with Gizmodo. And, to an extent, there have been significant leaps made in brain/prosthetic connectivity in recent years. For example, in 2015 a research team from the University of Houston crafted an algorithm that let users grab objects powered by his thoughts. And monkeys have also been shown to do the same in previous studies. However, the team remains hopeful and just wants to build upon their predecessors.

Next steps for the team include combining their research with previous studies done by other groups around the world who have had similar success. Ultimately, they want to equip prosthetic limbs with sensory feedback, potentially restoring a semblance of touch to the missing limb or a sense of where the prosthetic limb is located in space.

"That’s how we can begin to create truly responsive neuroprosthetic limbs, when people can both move it and get natural sensations through the brain-machine interface," Hatsopoulos said.