A small team from Columbia University Engineering designed a soft robotic muscle that doesn't require a lot of energy to do considerable feats of strength.

Researchers with Columbia Engineering developed a soft robotic muscle that is three times stronger than natural muscles. These 3D-printed synthetic muscles are not only incredibly strong, they're also cheap at just three cents per gram to produce.

The mechanical engineers developed the synthetic muscles to have a strain density (expansion per gram) 15 times greater than natural muscle. Thus, the researchers calculated that their robotic creation could lift 1,000 times its own weight.

The research team lead Hod Lipson serves a professor of mechanical engineering. Despite the world's fears of a Terminator takeover, Lipson said that human-like movement is hard to find.

"We've been making great strides toward making robots minds, but robot bodies are still primitive," said Hod Lipson. "This is a big piece of the puzzle and, like biology, the new actuator can be shaped and reshaped a thousand ways. We've overcome one of the final barriers to making lifelike robots."

So how did the team manage to create such a cheap yet powerful muscle? Aslan Miriyev is a postdoctoral researcher in Columbia’s Creative Machines lab and is the lead author of the study. He used a silicone rubber matrix with ethanol throughout in order to create an actuator with high strain and stress but with low density. The ethanol is distributed throughout the muscle in micro pockets. All the muscle takes to operate is enough voltage to heat and boil the ethanol in the micro pockets. Once the ethanol boils, the material expands as a normal muscle would under strain. The muscle was capable of expanding up to 900 percent when heated to 80 degrees Celsius. Once properly warmed up, the team could put the autonomous unit through its motion testing.

All the materials used by the team are easy to make, low in cost, and engineered to be environmentally safe.

Benefits of Being Soft

Soft robots can do a number of actions hard robots simply cannot perform. They can squeeze through tight spaces; they can contract and expand with ease to fit a range of climates; they can even double as a part of the human body. Despite the benefits, perfecting soft robotics has been a struggle for engineers for decades. Yet it's seen progress in recent years. Newsworthy developments like vacuum-powered robotic muscles from a Swiss team show a lot more promise. Another major soft robotics innovation was a 'muscle' that could help the human heart maintain proper rhythm. 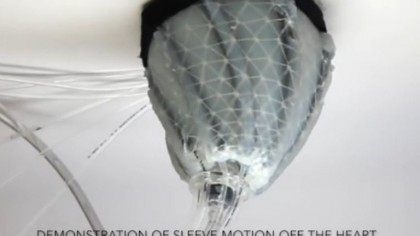 For Miriyev, the entire field of soft robotics opens up more doors to normalizing a future with robots.

"Electrically driven actuation at low voltage, along with low cost and user friendliness, may potentially revolutionize the way that soft and soft-hard robots are designed and engineered today," Miriyev told Digital Trends. "This may lead to development of low cost, nature-like soft and soft-hard robots, capable of assisting in the fields of healthcare, disasters management, elderly care, and almost any imaginable kind of assistance that people may need in their routine life, at home, on their way [to work], or at work, when robots are working side by side with humans."

You can read the full paper online via the journal Nature Communications.