Two teams of researchers restored damaged nerves to their full potential with a powerful biodegradable device.

Bioengineers created a new solution to healing damaged nerves by inventing a new type of bioelectronic 'medicine.' The implantable, biodegradable wireless device speeds up the process of healing some of the most difficult injuries in the human body.

Two teams collaborated on the project. Materials scientists and engineers from Northwestern worked closely alongside neurosurgeons from Washington University on the device.

The result is a dime-sized, ultra-thin wireless device that regularly delivers pulses of electricity to damaged nerves after surgery. After two weeks, the tiny device naturally absorbs into the body.

The research was published in a recent edition of the journal Nature Medicine.

A key benefit of pursuing biodegradable electronic devices is providing treatment directly to an affected area while reducing the repercussions of traditional, permanent implants.

"These engineered systems provide active, therapeutic function in a programmable, dosed format and then naturally disappear into the body, without a trace," said Northwestern's John A. Rogers, a pioneer in bio-integrated technologies and a co-senior author of the study. "This approach to therapy allows one to think about options that go beyond drugs and chemistry."

Rogers and his team have spent the last eight years specializing in electronics, especially biodegradable devices. When neurosurgeons at Washington University reached out to them, Rogers knew they could come up with an innovative solution.

"We know that electrical stimulation during surgery helps, but once the surgery is over, the window for intervening is closed," said co-senior author Wilson "Zack" Ray, an associate professor of neurosurgery, of biomedical engineering and of orthopedic surgery at Washington University. "With this device, we've shown that electrical stimulation given on a scheduled basis can further enhance nerve recovery."

The Northwestern team developed a flexible device capable of wrapping around injured groups of nerves. A remote transmitter powers the device like a cellphone-charging mat, the team explained.

The Washington University group was then tasked with testing the devices in lab settings. They used rats with injured sciatic nerves (the nerves that send signals up and down the legs). For an hour a day, the devices gave the rats electrical stimulation. The study lasted 10 weeks, and the researchers sectioned the rats into varying degrees of treatment.

The neuroscientists discovered the more days of electrical stimulation the rats got, the faster they recovered in both nerve and muscle strength. There were also no adverse effects found from the device absorbing into the rats.

"Before we did this study, we weren't sure that longer stimulation would make a difference, and now that we know it does, we can start trying to find the ideal time frame to maximize recovery," Ray said. "Had we delivered electrical stimulation for 12 days instead of six, would there have been more therapeutic benefit? Maybe. We're looking into that now."

A growing future of electronic devices

The success with this device is giving both teams more ideas about how they can apply the breakthrough research elsewhere. Next steps include strengthening the power of the signal to the device and lengthening the amount of time the device operates before degrading. 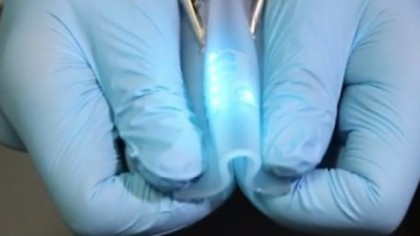 "We engineer the devices to disappear," Rogers said. "This notion of transient electronic devices has been a topic of deep interest in my group for nearly 10 years -- a grand quest in materials science, in a sense. We are excited because we now have the pieces -- the materials, the devices, the fabrication approaches, the system-level engineering concepts -- to exploit these concepts in ways that could have relevance to grand challenges in human health."

The researchers hope to one day engineer the device to replace treatments for a number of medical conditions in humans. Thanks to the device's broad utility, it might even become a temporary pacemaker or a spinal cord interface.