From military to medical usage, these carbon nanotubes could provide a new way to offset cumbersome batteries and electronic gadgets.

College engineers are teaming up with Air Force officials to create clothing that could someday charge a variety of gadgets. To do this, the team created a network of carbon nanotubes that conducted electricity, were strong, and also heat resistant.

University of Cincinnati professor Vesselin Shanov serves as co-director of the university's Nanoworld Laboratories alongside professor Mark Schulz. The two have collaborated on 'smart' materials that can power electronics in non-traditional ways.

"The major challenge is translating these beautiful properties to take advantage of their strength, conductivity and heat resistance," Shanov said.

Schulz predicted in a statement that a carbon renaissance is on its way to manufacturing. He predicted that carbon nanotubing could soon replace copper in cars and planes to boost efficiency while also reducing weight of vehicles. He and his team also noted carbon could replace polyester and other common synthetic fibers found in most clothing.

"In the past, metals dominated manufacturing goods," Schulz said. "But I think carbon is going to replace metals in a lot of applications.

"There's going to be a new carbon era -- a carbon revolution," Schulz said.

UC grad student Mark Hasse also worked on the project, and he spent the last year figuring out new ways to use carbon nanotubing.

"This pushes us to work in groups and to specialize. These are the same dynamics we see in corporate research and industry," Haase said. "Engineering is a group activity these days so we can take advantage of that."

Hasse explained how these networks of nanotubing start in a very small way, one not too far removed from nature itself.

"Each particle has a nucleation point. Colloquially, we can call it a seed," Haase said. "Our carbon-containing gas is introduced into the reactor. When the carbon gas interacts with our 'seed,' it breaks down and re-forms on the surface. We let it grow until it reaches the size we want."

The researchers can use nearly any from of carbon, and they've tested as many types of carbon as they can to 'grow' the nanotubes.

"I remember one group showed off by using Girl Scout cookies. If it contains carbon, you can turn it into a nanotube," Haase said.

The UC researchers then stretch the fibrous square over a spool in the lab. The tiny sheet of carbon then gets transformed into spun thread that can then be woven into textiles.

"It's exactly like a textile," Shanov said. "We can assemble them like a machine thread and use them in applications ranging from sensors to track heavy metals in water or energy storage devices, including super capacitors and batteries."

By weaving the capacity for power via current into clothing, the fabric could help replace cumbersome battery packs or help integrate devices into everyday clothing. This holds quite a bit of promise for the military, who could use the spun carbon nanotubes to offset the weight of gear and sensors.

"As much as one-third of the weight they carry is just batteries to power all of their equipment," Haase said. "So even if we can shave a little off that, it's a big advantage for them in the field."

Nanotubes could be used in medical technology

There's even potential for the nanotubes to be used in medical technology, Haase noted.

"On the outside, you can add a protein molecule. Cells will read that and say, 'I want to eat that.' So we can deliver medicine to support healthy cells, to restore sick cells or even to kill cancer cells," Haase said. 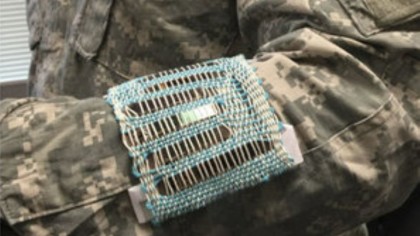 Don't expect this in medical technology just yet, the researchers caution. There are a number of tests that need to be conducted about how the human body interacts with these types of nanotubes before they're cleared to be used.

"That's why they've been moving slowly," Haase said. "Research has found that in high or acute exposure, carbon nanotubes can cause lung damage similar to asbestos. The last thing we want to do is cure one cancer only to find it gives you a different one."

Via: University of Cincinnati