These Disaster-Proof Homes Could be the Future of Modern Architecture

One designer has set out to transform the world's traditional understanding of 'disaster architecture.'

When one thinks of a disaster-proof house, images of cold bunkers, underground living, or houses on stilts might come to mind. However, one architecture firm produces projects that flip those expectations around with sleek, modernist designs and a futuristic feel.

Margot Krasojevic is an experimental architect and psychologist who has been designing the most incredible structures for her entire career. Her work is nearly impossible to categorize as each project differs enormously in appearance. In an interview with ArchDaily, Krasojevic expressed the frustrations of trying to be boxed into a style that was meant to be out of the box. 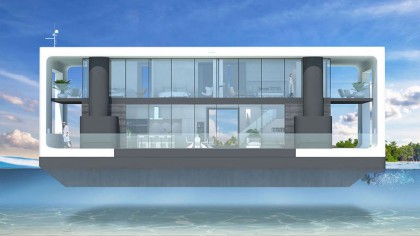 "Mostly people have forejudged or presumed to understand the work because of the simulation and digital graphic and we tend to be grouped as "parametric futurist crap architects" which is fair enough," she said, referencing how her work is presented in the media. "It is always frustrating when someone you have never met and knows little about your work, hasn't read your books or attended your lectures dismisses the projects as an "ism." It's easier, I suppose, to do this, as the alternative would be to re-edit your own framework of familiarity and reference."

However, one theme remains relatively constant -- sustainability. Krasojevic doesn't go for a shock factor (although her designs are certainly awe-inspiring). She said she takes into account the needs of the users in each project. And in the midst of a natural disaster, that functionality can be of paramount importance. Let's take a look at some of her most popular designs and see exactly how they could revolutionize our perception of 'disaster architecture.'

Like nearly all of Krasojevic's designs, this hurricane-proof home would make the most of its location. The house itself is designed to rotate around a retaining wall. Thus, with each push of the wind, it buries itself deeper into the surrounding land.

The Self-Evacuation Hurricane House includes living spaces made from a reinforced concrete frame. However, the structure itself is surprisingly lightweight thanks to rubber-coated wall sections that can move while the home rotates due to the wind.

The house would sit on an island specifically designed to flow the water away from the house's main living areas. The island's topsoil would push water down into a deeper soil, and surrounding wetlands absorb and store the floodwater.

This Italian hotel not only looks incredible; it can absorb the shock of deadly earthquakes. This plan was designed with the city of Naples in mind -- an area of Italy that is no stranger to earthquakes.

The hotel's plans include three unique elements that move away from each other after the hotel's seismometers detect tremors. The elements can easily move as they're made from lightweight aluminum, laminated glass panels, and post-consumer recycled plastic panels, making the whole structure deceptively strong despite its lighter feel.

"The architecture is choreographed by the earthquake, responding to the movement and minimising the impact of the kinetic energy," Krasojevic noted on the website. "The software used to develop the design involves simulations in order to understand the effects of dislocations in the landscape."