How to Prepare Your House and Life for Hurricane Season

Roofing styles, roof overhang, and garage door strength are just some of the ways homeowners can improve the ability for their house to withstand a hurricane.

Editorial Note: This story was originally published in October 2017 with regard to Hurricanes Harvey, Irma and Maria. It has been updated to include the latest information regarding Hurricane Florence and additional safety tips for hurricane preparedness.

Category 4 Hurricane Florence is heading full-speed toward the eastern United States. Estimated to make landfall on Friday, Florence is causing thousands to evacuate their homes and head for safety.

With a series of tropical storms leading up to Hurricane Florence, the 2018 hurricane season is definitely underway. 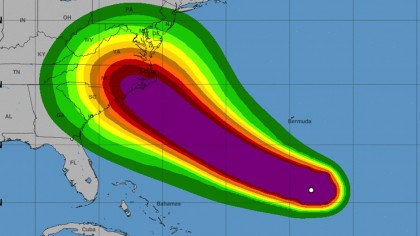 Just last year, Hurricanes Harvey, Irma and Maria made global headlines as they ravaged island nations and the southern part of the United States. The Category Four and Five hurricanes wiped out communications completely in several areas and knocked out power to millions. Hurricane Maria put the entire island of Puerto Rico into a power outage.

While nothing can guarantee complete safety in natural disasters, science offers some ways that those living in coastal areas can be better prepared for hurricanes, typhoons and excessive flooding.

Civil engineers around the world have spent years analyzing what styles and shapes of houses outlast others. Engineer Rima Taher with the New Jersey Institute of Technology developed a major study in 2007. The study came two years after Hurricane Katrina devastated the New Orleans area.

"Although I'd like to say that there is a simple and economical solution for housing that won't fail or collapse in the perfect storm, such information does not yet exist," said Taher. "However, it is obvious that thanks to the work of wind engineers and researchers that changes to home design and construction can make buildings safer for people, while saving government and industry billions of dollars annually."

How to prepare a house for hurricane season

"The current building standards can underestimate suction pressures on roof edges of houses with complex roof shapes, and more so for two-story houses," said JCU researcher Korah Parackal. The team also reported that most building designers only assume one "worst-case" wind direction. While the report notes that not every designer can predict each eventuality, poor planning can leave houses devastated -- even to the smallest detail.

"Our wind tunnel research has shown the margins for error are not as great as many people think and underlines the need for builders and apprentices to be aware that very small defects in construction can get you in very big trouble," Parackal said.

Strong connections between roofs to walls

Most of the force winds put on a house will be uplifting forces. That makes sense given the countless images of roofs and roofing shingles being blown off of houses with ease. Prior to Hurricane Andrew, the state of Florida allowed for roofs to be stapled to the walls of the house. Andrew caused some of the most damage in the state's history, enough to ban stapling roofs in 1993.

Gable roofs might be significantly cheaper to build than a hip roof but they're considerably weaker. They easily peel off as the overhang catches wind like an umbrella catching a strong draft. The pressure gets multiplied under the overhang, exerting more pressure on both the triangular wall and the connecting roof edges. They might be trendy architecture, but that trend doesn't hold up against a hurricane.

Hip roofs (like the ones below) don't give strong winds a foothold as all sides slope down to meet a connecting wall.

Most civil engineers agree that roof overhangs should be limited to 20 inches (51 cm). Anything longer could subject homeowners to strong wind uplift forces. As previously mentioned, those forces can compromise the entire roof.

Elevated homes serve a purpose beyond nicer views and aesthetics. 'Stilt' houses have been in coastal areas for centuries and for good reason. They can save houses from extensive flooding. During hurricanes and other natural disasters, one problem snowballs into another. Several feet of water damage not only lead to structural issues but compromise electrical circuitry, A/C and property loss.

A 2009 study done by Newcastle University even recommended that homeowners start looking to stilt houses in order to prepare for the rapidly changing weather patterns due to global climate change.

Why save the strongest doors for a small safe room when a homeowner could prepare an entire house? The Kiesling Wind Science and Engineering Research Center at Texas Tech created a list of the strongest doors and windows on the market. These doors range in style and type. Residents of the United States can also check their windows against the Federal Emergency Management Agency (FEMA) approval list.

One of the weakest points in a traditional house is the garage door. Once it goes, high-speed winds and rain can pressurize a house. That high pressure can weaken roofing connections and, in a few moments, a roof can pop off the house. Consumer Reports recommends homeowners have garage doors built to withstand 50 or more pounds of pressure per square foot. Single doors have much better chances of survival than double-door units.

Shuttering All Windows and Covering Them

There's an older myth that opening up windows during high-wind events like tornadoes and hurricanes levels out the pressure inside a house. It does the exact opposite, often leading to higher pressure in the house. Open windows also allow easy access to high-speed debris as they fly into a home.

Hundreds of thousands of people boarded up their windows prior to the triad of hurricanes within the last month. However, there are ways to make that even safer. Window clips (like PlyLox Windstorm clips) are screwless and nailless alternatives. They snap onto plywoods of various thicknesses. Users simply lodge the clips into the window space and the serrated part of the clip bites into the window casing.

While these clips don't guarantee safe windows during the strongest hurricanes, they can withstand impact and pressure resistance up to 150 mph in most cases.

Other tips to prepare for a hurricane

If you're leaving, know your evacuation route.

Living on the coast has a lot of benefits, but hurricane season is certainly not one of them. Millions of people are encouraged to evacuate their homes each year during hurricane season. While it might seem safe to wait for instructions from the government, it's smart to already have a plan in place well in advance.

Know where you're going and the estimated mileage it takes to drive there. If you plan on flying to your evacuation location, you might risk delayed travel due to incliment weather or spending hundreds on last-minute plane tickets.

Regardless of where you go, always include any pets you have in your evacuation plan.

If you plan on staying, keep stock of your non-perishable supplies.

For a lot of people, leaving during a hurricane -- despite calls to evacuate from officials -- simply isn't an option. Anyone wanting to ride out a hurricane needs to have several standard supplies on hand.

Most hurricane prevention officials encourage a three-day supply of drinking water for your entire household. Food shouldn't need cooking or refrigeration. Have first aid supplies, candles or lamps with fuel, and extra batteries in water-proof containers. Ensure members of your household have the prescription drugs they need for a week or longer at home.

There are also plenty of home-goods items to have on hand before a hurricane. Heavy plastic sheeting or plywood, hammers, and nails are standard for anyone wanting to board up their house. Flashlights are critical, as are portable NOAA weather radios.

Make a catalog of your personal property.

Take pictures of items in your house you'd want replaced by insurance. Having these images on hand will help the claims process as well. It can even help you substantiate your losses for tax purposes and help you apply for disaster aid.

If you're evacuating, this part is particularly crucial. It might be weeks or months before you're able to check on the status of these items.

Insurance policies will vary, especially if you live in an area that requires state-mandated flood insurance. As the Insurance Information Institute points out, your homeowners insurance covers the cost of temporary repairs from hurricane-related damage and reasonable additional living expenses if you have to relocate. Flood insurance is separate from those standard policies.

Always have a hard copy of your insurance policy on hand in a water-proof bag. If you're evacuating, bring a hard copy with you to be safe.

Prepare your house, even if you're evacuating.

There are several basic upkeep items the U.S. government recommends anyone doing before a hurricane hits their house. Declutter all drains and gutters to minimize flooding risks. Install check valves in your plumbing system to prevent backups. If you wish, consider hurricane shutters and invest in other hurricane-related additions to your house.

Figure out how you'll communicate with family and friends if you lose power.

With an increasing reliance on smartphones and the internet to communicate, this is often one of the most overlooked aspects of hurricane preparedness. Planning ahead for this step will give you and your loved ones peace of mind should either of you lose power or a communication line goes down.

During disasters, officials recommend sending text messages. They're short, often more reliable than phone calls, and don't take as much battery usage. Also, phone lines can be overloaded with calls to emergency responders. Texting is often the safest bet to communicate with family and friends that you are safe.