These Lamps Light Up Using Plants and Photosynthesis

A Dutch design firm wants to tap into the excess energy expelled by plants during photosynthesis and convert that energy into a usable electric current.

Remember the bioluminescent foiliage from the sci-fi movie Avatar? One Dutch designer is creating light figures that seem straight from the movie. Ermi van Oers developed the Living Light project to make a more sustainable alternative to lamps and smaller light fixtures. 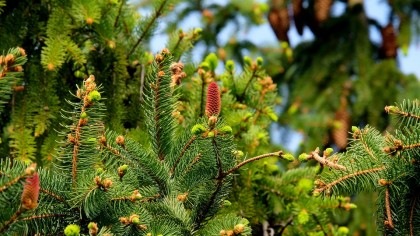 Microorganisms convert the chemical energy produced during photosynthesis into an electrical current. As plants convert CO2 into glucose, organic compounds get passively released through a plant's roots. And it's that passive expulsion of compounds that Living Light uses. The company calls it "a cross-pollination of nature, science and design."

"Naturally occurring bacteria break down the organic matter and release electrons and protons," the team explained. "The plant microbial fuel cell consists of an anode compartment that captures the electrons. The electrons are transferred via a wire to the cathode. The flow of electrons from anode to cathode can be used as electricity. The system is applicable to all sorts of plants that live in wet ground."

That electricity is used to power LEDs within the system that van Oers and her team ensure are safe for the plant and its environment.

According to van Oers, the applications for this project are wide-ranging. Even though some of the plants involved might be small, van Oers's thinking most certainly is not.

"The potential is huge," the designer said. "Street lights could be connected to trees. Forests could become power plants. Rice fields in Indonesia could produce food and electricity for the local population."

Marjolein Helder is the CEO of Plant-e, a group partnering with Living Light.

"What is more beautiful than getting electricity from living plants? Your environment is able to generate electricity while you are still able to enjoy nature," Helder said.

Helder and Plant-e developed a streetlight project similar to the goals of Living Light. Their system uses electrodes within the soil to access the passively expelled electrons. The project was called "Starry Sky" (inspired by the Van Gogh painting of the same name) and debuted in November 2014 near Amsterdam. Plant-e also uses their technology at its company headquarters in Wageningen.

van Oers and the rest of the Living Light team one day hope to have the enhanced plants in city areas and parks, and they're already working on making their streetlight idea a reality.

"I hope we come to a point where every plant pot is provided with this technology, and we don’t know any better than that plants are part of our energy system," said van Oers. "Nature will get a higher economical value and we will start making more green places so that biodiversity can flourish, while lowering greenhouse gas emissions at the same time."

The Living Light units are each handmade and are headed to the production line soon, according to the company. They're made with a combination of handblown techniques for the glass and 3D printing for the hardware attached. Each light will cost roughly 1500 euro ($1,780 USD) and the company will only sell 50 lights at a time.