An international team of bioengineers developed a new polymer that can change color when stretched and quickly adapts to its surroundings.

By  Shelby Rogers
March 31, 2018
The change from the molecular structure of the polymer down to the iridescent color of the plastomers (bottom right) D.A. Ivanov and S. S. Sheiko

What if our tissues could adapt to their surroundings and change in response to those environments? That's exactly the question one international team of researchers sought out to solve with their latest innovation. This team of bioengineers developed a biocompatible synthetic 'skin' that replicates how tissues function on a chameleon. And yes, this includes the chameleon's signature color change.

The researchers span the globe, comng from CRNS, Universite de Haute-Alsace and ESRF, the European Synchrotron, with major contributions coming from two U.S.-based schools -- the University of North Carolina at Chapel Hill and the University of Akron).

Chapel Hill chemist Sergei Sheiko helped produce the biomaterial. He said the polymer could lead to and inspire an entire generation of biomedical devices and bioengineered solutions. He said the material could change the risks often associated with medical implants by mitigating the body's often inflammatory response to something new.

“Our body can be viewed as an aging car that constantly needs replacement parts. Given the steadily aging population, this creates a pressing need for better and more diverse materials for biomedical devices,” said Sheiko, the George A. Bush Jr. Distinguished Professor of Chemistry. “One key demand is that these materials closely mimic the mechanics of living tissue.”

It's critical that developers of medical implants and those doctors who put them into someone's body pick the right materials. Choosing the wrong types of polymers could lead to a whole host of issues and often leads to necrosis and inflamation. However, the researchers noticed that in a number of tissues throughout the body -- including the skin, intestinal wall, and the heart -- can all be soft yet stiffen as they're being stretched. This new polymer can reproduce that behavior.

“Until now, synergistically integrating mechanical and optical performance has been a big material design challenge because we are essentially trying to mimic the skin of James Cameron’s Avatar: soft on touch, stiff upon deformation and colored for appeal or camouflage,” Sheiko said, referring to the global blockbuster Avatar.

The researchers managed to create this effect with a triblock copolymer that uses synthetically cross-linked elastomer. By carefully adjusting the polymer's structural pattern, the team discovered that the material can follow the same strain curve as any biological tissue (which for the study was pig skin). Due to its biocompatibility, it doesn't require additives or a solvent; it remains stable as long as there are biological fluids. 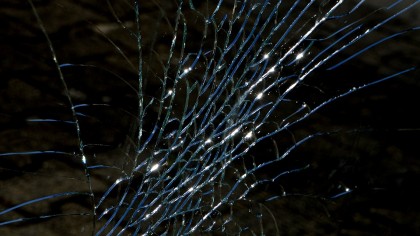 This Material Heals Under Pressure Rather than Cracking

But one of the coolest elements of the polymer? During the experimentation process, the researchers noticed that its color changed upon deformation. According to the study, this color change is a physical phenomenon rather than any biochemical response, and it's caused by light scattering from the polymer structure itself. This light interference is similar to the mechanisms that change a chameleon's skin.

Sheiko said the discovery itself could lead to more personalized prostheses and implants in the future -- even if it won't necessarily give someone the ability to change their skin color.

“The design-by-architecture approach reported in our paper will open the door for making materials a soft as brain tissue and as stiff as skin — ideal for direct use as implants for reconstructive surgery and drug delivery,” Sheiko said.

This New Wearable Electronic Device Becomes One With Your Skin