These Old Mine Shafts Could Soon Generate Power

While coal slowly dies as an industry, the remnants of heavy coal mining will exist -- unless engineers develop different uses for mining equipment and technology. A new United Kingdom-based startup is looking to do just that by using old mine shafts to create energy.

The startup is called Gravitricity, and it recently scored over £650,000 ($900,000 USD) in backing from the British government for the project. It uses a massive 2,000 tonne suspended weight system to capture and make energy. According to the website, the process is "based on a simple principle: raising and lowering a heavy weight to store energy." Similar to a pendulum, the weight of the system keeps everything going.

One Gravitricity system can create up to 20 MW of power in shafts that range from 500 to 5,000 feet deep. The website also noted a 80 to 90 percent efficienty as well, with a response time of zero to full power in less than a second. Gravitricity said each unit can range between 1 and 20 MW of peak power with durations going as long as 8 hours. According to notes, the whole system lasts up to 50 years without degradation. One of the best benefits is its cost savings. Rather than build an entirely new structure that then ties into a previously existing infrastructure, the mine shafts are the existing infrastructure.

Charlie Blair serves as Gravitricity's managing director. He told Business Green that the company is now looking to partner with experienced miners and mine shafts that are perfect to test the weighted technology. 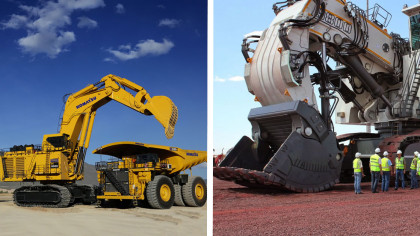 11 of the World's Biggest Mining Excavators

"As we rely more and more on renewable energy, there is an increasing need to find ways to store that energy - so we can produce quick bursts of power exactly when it is needed," he explained. "When there is excess electricity, for example on a windy day, the weight is winched to the top of the shaft ready to generate power. This weight can then be released when required - in less than a second - and the winches become generators, producing either a large burst of electricity quickly, or releasing it more slowly depending on what is needed."

"It's a simple case of 'what goes up, must come down'," Blair said. "The difference is we don't need a mountain with a loch or lake at the top, and we can react much faster."

Currently, the group is working toward getting a scale demonstrator later this year. They expect a full prototype by 2020. Digging will eventually be an option for areas that are without mine shafts but lack the more traditional green energy options. For now, however, the company will stick to the pre-constructed holes of mine shafts with the hope that drilling costs will go down soon.

The metaverse could generate $3 trillion for the economy by 2031