These Robots Can Assemble Themselves In Midair

Robotic autonomous drones could be soon controlling the way we build things. Watch these drones move into formation to create structures.

Drones with fully autonomous capabilities are inevitable at this point. Besides delivering your pizza or a package from Amazon, there are a lot of practical uses for drones. A group of researchers at the University of Pennslyvania have unveiled how drones can potentially shape the way we build things in the future.

Part of the ModLab research group and lead by Bruno Teles Gabrich, researchers from UPenn, have created an impressive series of modular flying robots that can assemble themselves while in flight. The project is a collaboration between KumarLab and ModLab. The small little quadrotor drones are agile and easily able to move, even with their magnetic cuboid frames. The drones are able to travel rapidly vertically or horizontally. As described by the team, "The module is based on a quadrotor platform within a cuboid frame which allows it to attach to other modules by matching vertical faces."

Like something reminiscent of Transformers or Voltron, the robots can assemble to create shapes and forms while hovering above the ground. As demonstrated in the video, the robot drones take to the air, slowly moving closer to each other so that they can snap into place to form their designated shape. 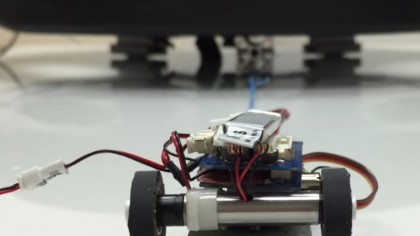 The ModQuad system resembles that of other biological systems like ant or bee colonies. As you are well aware, these colonies require these hives to operate together to accomplish difficult tasks. Impressively the drones can coordinate and operate autonomously to form their structures.

Under professor Mark Yim, ModLab Robotics Lab at the University of Pennsylvania is part of the GRASP and the Mechanical Engineering and Applied Mechanics Department. The team focuses much of their research on modular solutions for the future. As stated by the team on their website, "A modular robot is a versatile system consisting of many simple modules that can change their configuration to suit a given task. These systems are inherently robust due to their redundancy, adaptability, and ability to self-repair."

What role will autonomous drones have in your future? How do you think modular technology will shape the world of engineering?