These Super Flexible Robotic Muscles Can Repair Themselves Just Like Humans

These actuators are meant to be as fast as hummingbirds, as flexible as octopuses, and as strong as an elephant -- all for just 10 cents each.

A team of university researchers met in a basement nearly two years ago, seeking out nothing other than quality robotics. The research money came from start-up funding rather than massive government investments, and most of the team had never before co-authored a paper. However, the creations of these engineers from the University of Colorado Boulder just gave robots the ability to become a lot more human.

In the most recent issues of Science and Science Robotics, the researchers describe their new style of soft robotic muscle. The muscle is a series of oil-fueled pouches that function due to electric current. The actuator itself is just as strong (if not stronger) than human muscles and can also pull off more contractions per second.

The new type of robot-muscle is called "hydraulically amplified self-healing electrostatic" actuators -- or HASEL -- and it has the potential to rethink how flexible robotics can be made.

"[These engineers] are helping create the future of flexible, more-humanlike robots that can be used to improve people’s lives and well-being,"  said Bobby Braun, dean of CU Boulder’s College of Engineering and Applied Science. "This line of research is a core, interdisciplinary strength of our college."

Like a lot of other robotics innovations, this project gets its inspiration from nature. Ideally, the team from UC Boulder's Keplinger Research Group wanted the actuator to be as flexible as an octopus, strong as an elephant, and as speedy as a hummingbird. 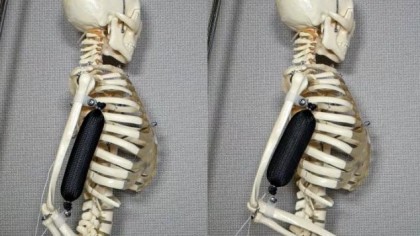 "We draw our inspiration from the astonishing capabilities of biological muscle," said Christoph Keplinger, senior author of both papers, an assistant professor in the Department of Mechanical Engineering and a fellow of the Materials Science and Engineering Program.

"HASEL actuators synergize the strengths of soft fluidic and soft electrostatic actuators, and thus combine versatility and performance like no other artificial muscle before."

In the paper, the team details different ways the thin, transparent muscle moves. There are three main designs for the HASEL actuator. One was a donut-shaped muscle with electrodes on the side. The second design is from having ionic conductors throughout liquid pockets in a stretchy material. The third design is called the Peano-HASEL actuator and involves three small rectangles filled with liquid. Those pouches contract when hit with electricity.

"The ability to create electrically powered soft actuators that lift a gallon of water at several times per second is something we haven’t seen before. These demonstrations show the exciting potential for HASEL," said Eric Acome, a doctoral student in the Keplinger group and the lead author of the Science paper. "The high voltage required for operation is a challenge for moving forward. However, we are already working on solving that problem and have designed devices in the lab that operate with a fifth of the voltage used in this paper."

Traditional issues with robotics stem from the ability to scale up the project while keeping costs low. However, the researchers from CU Boulder don't exactly have that problem.

“We can make these devices for around 10 cents, even now,” said Nicholas Kellaris, also a doctoral student in the Keplinger group and the lead author of the Science Robotics study. “The materials are low-cost, scalable and compatible with current industrial manufacturing techniques.”

So, they said further research will be spent trying to optimize the materials used and also create the best possible combination of shapes to improve the HASEL actuator's efficiency.

The Solution to Our E-Waste Problem? Repair, Don’t Waste