These Supercharged DIY Powerwalls Are Giving Tesla Some Serious Competition

Online communities for Powerwall builders are now prevalent worldwide and have become a meeting ground for hobbyists. Some have actually found ways to push their Powerwalls to store far more energy than Tesla’s version.

Tesla’s Powerwall is the backbone of their alternative energy family. The lithium-ion battery system works alongside Tesla’s electric cars, solar roofing, and panels. It can store up to 14kWh of energy which is, unfortunately, significantly less than what a typical household in the US will consume in a day.

Since its launch in 2015, many alternative energy hobbyists have found ways to cheaply replicate Musk’s US$3000 innovation and have started creating versions of their own.

Online communities for Powerwall builders are now prevalent worldwide and have become a meeting ground for hobbyists to exchange ideas about their creations as well as suggesting procedures for improving on designs. Some have actually found ways to push their Powerwalls to store far more energy than Tesla’s version.

Glubux, a French forum member of DIYPowerwalls, told Vice’s Motherboard that their wall could store up to 28kWh.

"I run all the house with it, in fact, I even bought an electric oven and induction cooking plate to use the extra energy during summer," they claimed.

Building your own Powerwall

These DIY versions use recycled 18650 lithium-ion batteries stored within hand built rigs. The batteries come primarily from old Dell, HP, Lenovo, LG and a range of other laptops.

“People often just throw away old laptop batteries, Jehu Garcia, one of the world’s most popular Powerwall builders told Motherboard. "I thought that's incredibly wasteful because everyone online is showing that you can harvest these cells and reuse them."

Re-using batteries has become an industry all over the world, with countries like the US and Britain brainstorming ways to prevent environmental damage from batteries being disposed of as municipal solid waste. In 2015, Energizer debuted their range of disposable AAA and AA alkaline batteries made with 3.8% to 4% (by weight) of recycled batteries, branded as EcoAdvance.

However, getting their hands on these batteries is becoming a harder prospect due to laptop companies holding tight to their old products.

"I'm hoping we're going to push these companies to be okay with using and reclaiming these batteries," Garcia said.

After gathering recovered batteries, they need to be cycled before usage. "These things are old...you kind of have to wake them up by cycling them," Garcia explained to Vice.

The usable batteries are then arranged into pre-built holders or “packs.” “Busbars” or strips of copper are fused to the top of the pack to conduct electricity. The completed wall is then attached to an inverter and mounted inside a garage or outside holding area for safety reasons.

Regarding safety, Powerwall builders like YouTuber Daniel Römer aren’t too concerned. Romer owns one of the biggest DIY Powerwall’s, containing over 22,500 cells that can store up to 100kWh of energy and power his house for up to a year.

"I run Batrium BMS with specially designed software that controls my four units including disconnecting the battery banks if something goes wrong,” he explained to Motherboard.

Garcia and the rest of the DIY Powerwall community might be doing more than just saving themselves a pretty penny. Besides creating a diverse community of thinkers, their excessive reuse of these retired batteries could have a positive environmental impact. 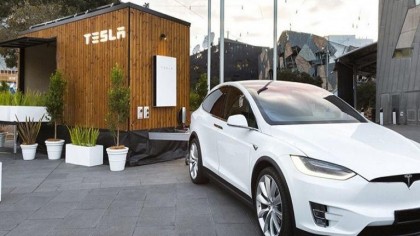 A jet-powered sled? Get ready to cruise through white-out conditions.