Despite the constant innovations, banks can often struggle with implementing new technology into their systems. Two major credit card companies, MasterCard and Visa, want to make it easier for everyone by getting rid of outdated practices and using headline-making upgrades.

The issues banks have with an upgrade make sense. Major companies have to alert hundreds of thousands of customers about a change. They then have to make applying technology uniform across the board. Then there's the matter of changing old technology over to the new technology; quick turnarounds can often lead to frustrated customers who might even outright refuse the new idea.

For example, when chips appeared on credit cards in 2015, some retailers didn't meet the deadline for getting a chip reader. Some customers delayed activating a new card for fear of inconvenience or security breach.

Visa to Use Facial Recognition Instead of Passwords

Those wanting to apply for credit cards might soon have to take a selfie in order to do so. In the wake of smartphones integrating facial recognition to unlock devices, Visa wants to embed that technology into its identification software. The company recently introduced the API-based Visa ID Intelligence. It would provide banks and credit unions the ability to install biometric tech into their apps rather than shelling out money to pay an in-house biometrics team.

Visa representatives and partnering companies note that biometric scans also take out the frustration of forgotten passwords or the temptation of reusing the same passwords for all accounts. The idea also comes shortly after the Equifax breach in which nearly 146 million United States residents had personal information ranging from Social Security numbers to addresses stolen.

"[Biometrics] are more secure because the deployment of them is device resident," said Julie Conroy, a research director at the Aite Group. "It’s not something stored up in a cloud somewhere that the bad guys can compromise. They have to copy the biometric and your unique device identity as well."

Visa also hopes that Visa ID Intelligence could allow users to confirm purchases that a credit company might tag as suspicious.

MasterCard Does Away with Signatures

Beginning in April 2018, MasterCard users will no longer have to sign for a purchase when using their credit or debit cards. The company has already been reducing the number of required signatures over time. Currently, more than 80 percent of Mastercard transactions don't require a signature. 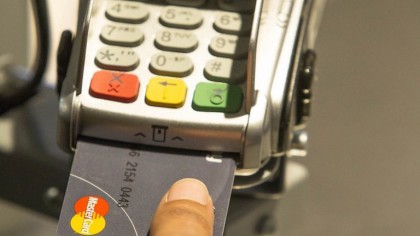 "Eliminating the need for signature is another step in the digital evolution of payments and payment security," the company wrote in a recent blog post. "At first glance, this might sound like a radical proclamation, especially to people who have had credit and debit cards for decades. However, the change matches all of our expectations for fast and convenient shopping experiences. Our consumer research found that a majority of people believe it would be easier to pay and that checkout lines would move faster if they didn’t need to sign when making a purchase."

MasterCard also noted that stores supporting its credit cards also support the decision as it gets customers through the checkout lines faster. (No more questions like "Do I sign with my finger or this pen?" or "Can I do this over? My signature looks terrible.")

Want to Get To Your Destination Faster? Then Don't Change Lanes