Entomologist David Hughes is keeping the subject of zombie ants alive, bringing his work to both the scientific community and the public at large.

Zombies are real -- at least in the insect kingdom.

Carpenter ants found in the Brazilian rain forest are susceptible to a very strange type of fungus. After infection, they are transformed into what locals describe as ‘zombie ants’, named so because after the cephalopods are infected they are completely at the mercy of the fungus, enacting a strange and agonizing drama that lasts roughly 10 days and ends with the death of the ant.

The deadly fungus, named Ophiocordyceps, influences the ant to leave its nest, and wander aimlessly before biting down onto the underside of a leaf hanging about a quarter of a meter above the ground. Once satisfied the ant has completed its task, the fungus burrows through the ant’s head with a stalk, dropping spores that will infect future ants!

Penn State Assistant Professor of Entomology and Biology David Hughes has been tracking the animals for years, in locations as remote as Thailand, to those as close as the South Carolina woodlands. The rainforest ecologist is particularly interested in subsets of parasites that take over and control the minds of the host. Although he has studied and observed similar behavior in crickets and wasps, the subject of zombie ants has spawned the most interest from the public, resulting in documentaries, video games, and even consultant work for Hollywood films.

For the film World War Z, he was asked to offer his opinion, based on his field work, on what behavior they could expect from the fictional human zombies: "It's the evolution of virulence, competition—all the meat and potatoes that we do in the Centers for Infectious Disease Dynamics, but brought to the screen." Another project involved the Sony video game The Last of Us, which featured the same fungus Hughes studies. Fame and notoriety aside, Hughes is quick to acknowledge that the most important benefit is generating greater interest from the public in science: “…I'm motivated by this opportunity to get the science to people who wouldn't get it in another way. I think that the media, movies, and games are a really, really great way to do that."

In a sense, the behavior of the host is merely an expression, or extension, of the genes of the infecting parasite. Biologists refer to this as extended phenotype (EP). In a study on EP, titled “Extended phenotype redux. How far can the reach of genes extend in manipulating the environment of an organism?”, he explains that in EP “the genes of an organism can be expressed beyond their immediate biological boundaries, such as skin, shells or leaves.” Or, as Hughes writes: "While the manipulated individual may look like an ant, it represents a fungal genome expressing fungal behavior through the body of an ant." 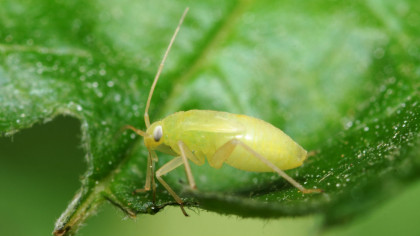 The Very Strange Science of Aphids

According to the entomologist, beyond the landmark work carried out by scientist Richard Dawkins three decades ago, there was little acceptance of EP in the scientific community, with acceptance coming “only now in the last five years...”

Hughes explains, however, that work in this area, as in many new areas of scientific research, simply comes down to hard work and putting in the time and effort: "There's a million other things you could find out that are as complex and as beautiful as the zombie ant phenomenon," he says, adding, "The problem is so few of us, even biologists, are willing to get down on our hands and knees and spend months in the forest looking at them."