A section of an experimental solar road was stolen by thieves in China. The motivation for the crime remains a mystery.

Solar panels are becoming a common site on rooftops all over the world. But solar roads are still a novelty. So much so that in China a section of a recently installed solar road has been stolen. According to the Qilu Evening News, a 0.14 x 1.84m section of road was carefully cut out and removed in Jinan by some curious thieves. The experimental stretch of road was installed late last year and the thieves struck just five days later on January 2nd. The road has been repaired but authorities continue to investigate the mystery of the missing road.

Solar roads are expensive to make and install but its individual solar components are relatively inexpensive. If the thief stole the road to make a fast buck, they will be sorely disappointed. The stretch they selected also won’t be enough to power a house so there is no win there either. 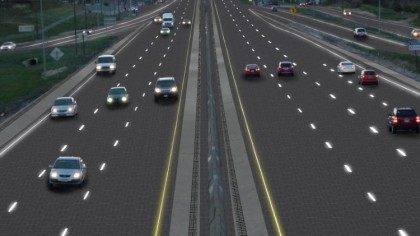 The whole of the U.S could be powered by solar roads

Most evidence suggests that the road was stolen in order for its design secrets to be revealed. Why the curious thieves couldn’t have found out their desired tech knowledge in another way will remain a mystery. It is unlikely that there is going to be a spate of missing solar roads around the world. While the technology is still new now, plans for solar roads are popping up all over the world and as the technology becomes more mainstream, we can only assume potential thieves will find other ways to satisfy in their questions.

Solar roads work by combining efficient solar panels with a transparent hard top coating. The technology has been criticised for being too fragile and being susceptible to damage from snow and other extreme weather conditions. Currently, solar road panels and technology is very expensive. The world's first solar road was opened in Tourouvre-au-Perche in Normandy, France at the end of 2016. The one-kilometer road has approximately 2,800 square meters of photovoltaic cells which is enough to power a section of the village's street lighting.

The groundbreaking road was designed and built by Colas. The company has been developing its solar road technology for five years under the brand name Wattway prior to installation and this stretch will serve as a test of the road's resilience to traffic as well as its ability to generate useful amounts of power. The Wattway panels are just a few millimeters thick which means they can be installed over the top of existing bitumen or asphalt. The cost of the panels will be what holds the technology back from making a more sweeping impact on cities around the world. This short stretch of road cost almost €5 million meaning any major road retrofitting would come at too high a price for most governments. Particularly, when the technology's ability to generate power is still to be proven. While the Wattway panels boast an average of 15% efficiency, laying the panels flat on the ground and not angled to best absorb the sun will certainly reduce their ability to generate power.