A new type of flexible 'tattoo' could lead to a massive step in wearable computing systems. A team from Carnegie Mellon University's College of Engineering created a moldable circuits using an off-the-shelf, ordinary printer.

Given the simple nature of its construction, the cost of making these unique circuit units is relatively inexpensive. During the process, trace amounts of an electrically conductive liquid metal alloy join to tattoo paper. That tattoo paper then adheres to human skin with just a little bit of water. The process is similar to putting on a child's decorative tattoo with a sponge or a wet rag.

This streamlines the often frustrating process faced by other wearable electronics. Other kinds of wearables require extensive manufacturing techniques that take place in cleanrooms. The finished products also often lack the same performance needed for stretchy digital circuits that adhere well to skin. 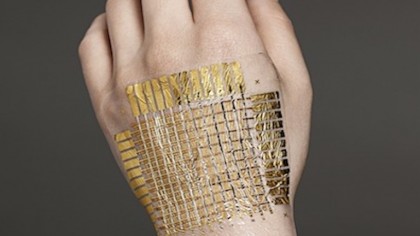 Carmel Majidi serves as an associate professor of mechanical engineering at Carnegie Mellon University. Majidi has spent the last several years improving and perfecting soft electronics, and many consider him to be a pioneer in the field. Majidi recently created liquid metal transistors to be used in wearables. He's made invisible circuits, self-healing circuits, and thermally conductive rubber to be used in circuits. Majidi and his team members are the ones responsible for these unique, flexible tattoos.

"Our technique is simple, said Majidi. "We use a desktop inkjet printer to print traces of silver nanoparticles on temporary tattoo paper. We then coat the particles with a thin layer of gallium indium alloy that increases the electrical conductivity and allows the printed circuit to be more mechanically robust. The tattoos are ultrathin, very stretchable, and inexpensive to produce."

One of the biggest benefits to the wearable tattoo process is the low manufacturing cost. However, these tattoos provide other benefits to wearers. The tattoos boast properties very similar to those found in lightweight fabrics, which means they can bend and fold with ease. The Carnegie Mellon team estimated the wiring can withstand strains up to 30 percent. That flexibility is roughly that of human skin. Because of that 30 percent window, the tattoo circuits can conform and stick to very curved 3D surfaces. In practice, the team adhered the tattoos onto a model of a human brain and a lemon to showcase just how sticky and flexible the system was.

The research and full study can be found in a recent edition of Advanced Materials journal.