By  Shelby Rogers
Dec 20, 2017
The US Department of Energy/Wikipedia

At age 11, most middle school students struggle with remembering their locker combination or trying to juggle homework while watching a new Netflix series. But Alexia Bravo has bigger things on her mind -- saving the planet with renewable resources.

Bravo invests in wave energy, something that she notes "has the power to replace a non-renewable source of electricity for a home near the ocean."

At just 11 years old, Bravo was the youngest person to present at the American Geophysical Union’s (AGU) annual meeting. This fact is only compounded by the knowledge that this is Bravo's second year to present on her innovations in wave technology. This year's prototype expanded into wind and solar energies as well as furthering her findings with wave energy.

So, after doing extensive research on the subject, young Bravo decided to take action. She modeled and then built a small-scale wave generator that can produce 5 volts of electricity. The generator consists of 16 smaller wave generators. Each of those generators has 200 feet of copper wire, 12 magnets, and a buoy.

"I tested my design in the Pacific Ocean and was able to power a string of lights I had attached to the generator," she wrote in her abstract for the conference. "While the waves in the ocean moved my buoys, my design was powered by the vertical motion of the waves. My generator was hit with significant horizontal wave motion, and I realized I wasn’t taking advantage of that direction of motion."

"To make my generator produce more electricity, I experimented with capturing the energy of the horizontal motion of water and incorporated that into my generator design. My generator, installed in the ocean, is also exposed to sun and wind, and I am exploring the potential of solar and wind energy collection in my design to increase the electricity output."

She prototyped her early turbine designs with paper mache and tested their reaction to wind by putting them in front of a fan. Bravo also measured wind speeds on the beach where she discovered lower water leads to weaker winds.

"I think I’ll have to reconsider my original design based on the data," she told Earther in an interview. "I might have to take the wind out because what’s the point of spending on that stuff when you could have something else." 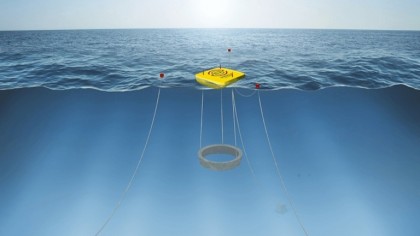 "AGU is committed to developing a strong and diverse pool of talented researchers who can help us build a sustainable foundation for the future, and our Fall Meeting attendees recognize the importance of supporting the next generation of Earth scientists," she said.

Bravo said that once her prototypes maximize their electricity output, she wants to scale up her design and make it more accessible to those looking to use cleaner energy sources.

"Only 10 percent [of U.S. electricity] comes from renewable energy. I thought that wasn’t enough," she said in an interview. "I thought that on a small-scale, I could take one house of the grid at a time."