The Thunder Child is a boat that is impossible to capsize. It has a cruising speed of 40 knots and will comfortably hit 60 knots when pushed full throttle.

The Thunder Child by Safehaven Marine is designed for Navy and water law enforcement organizations. It possesses incredible self-righting technology that makes it impossible to capsize.

Its 17-meter long hull is pushed effortless through any weather conditions by a pair of Caterpillar C12.9 turbocharged, supercharged and intercooler diesel engines producing 1,000hp each.

The boat's inability to capsize is achieved by its sleek hull design with a very low vertical center of gravity in addition to a buoyant superstructure. The boat can sustain positive stability up to 120 degrees of heel. If heeled or tipped beyond 120 degrees a self-righting mechanism will correct the vessel.

The high-speed boat can accommodate 10 crew members on board. Inside the boat is 6 high tech AMP Wave breaker shock mitigation seats and 4 fixed seats. There is also a separate sleeping compartment.

The boat is designed for both short emergency response requirements for land as well as longer search and rescue or reconnaissance missions. It is fitted with long range fuel tanks of 5,000+L allowing a range of over 750NM. The Thunder Child has a cruising speed of 40 knots and will comfortably hit 60 knots when pushed full throttle.

The tough little boat also has the capacity to be fitted with weapons such as grenade launchers and guns making it suitable for a combat vessel.

In July last year, Thunderchild set a world record time for circumnavigating Ireland via Rockall. The boat completed the challenge in a total time of 34 hours, 1 minute and 47 seconds to cover 2,067 kilometers (1,100NM). 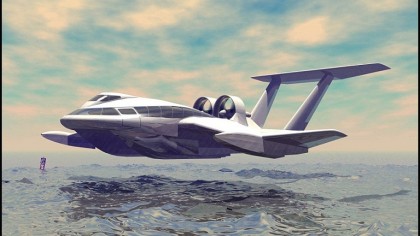 The boat completed the record-setting journey with five crew onboard. The crew experienced rough weather as they set out to pass Rockall, a rocky outcrop, 500 kilometers off the Irish coast in the Atlantic ocean.

“Heading out to Rockall it was lumpy during the night which was probably the most dangerous leg of the voyage due to maintaining high speeds in the dark, but once we arrived it was fine,” said Managing Director of Safehaven Marine and the captain of the boat Thunderchild Frank Kowalski.

The crew took a short break in their record attempt once they reached the rock to lay a small plaque and capture some photos of them there at sunrise.

The Safehaven Marine is an Irish company that designs and build fiber-reinforced plastic (FRP) boats and military craft including patrol boats, crew transfer vessels, and hydrographic survey catamarans. The company was established in 1996 and have built over 120 boats which have been deployed to 26 countries.

Watch This Turbo Diesel Go-Kart Do a High-Speed Run