This $200K University Building Is Made of 4 Recycled Shipping Containers

The Media Lab at Bard College was made from 4 recycled shipping containers for about $200,000.

The Bard College Media Lab, designed by MB Architecture, is 960-square-feet and is made up of four recycled shipping containers.

It follows in the footsteps of the company’s Container Studio and Insta House. The company has formulated this architectural system as “an exploration of very affordable single-family homes and workspaces” about nine years ago. They have built the first prototype in 2009.

The Media Lab at Bard College in Hudson Valley serves the University’s Experimental Humanities Department. The containers from the lab were retrofitted and completely pre-finished by an outside contractor in line with MB Architecture’s specs.

They first applied a closed-cell foam for insulation, cut holes and installed double-pane windows. They then added all the interior walls, carpentry, cabinetry, electric installations, plumbing, and floors. The exterior was refinished after that.

The Insta House, on which the design is based is a prototype, prefabricated, two-story home with a bedroom upstairs and main living area on the ground floor, built in the Hamptons in 2009.

The project was awarded the American Institute of Architects Peconic Chapter Honor Award for Architecture. “Since then, we have taken the double-height, four container model, to the next level.” the firm said.

“Completely prefabricated, the two bedroom, two bathroom home includes a full kitchen and a living room; it is fabricated in eight weeks and installed in one day, all for $169,000.”

The modules were then transported to the site that was previously prepared. It was a building foundation with all the necessary electric and plumbing connectors.

“The installation started at 11 a.m. and by 3 p.m. the second floor was stacked and they were walking inside the building.” the architects said.

The contractor then spent a few more days to add the finishing touches and connect the electrical and plumbing lines to the site’s utilities. A few weeks later, the building became fully operational.

The space at the moment includes windows from floor to ceiling, air-conditioning, and a big garage door. The door can be opened for students to enjoy some fresh air or to use as an open-air stage. 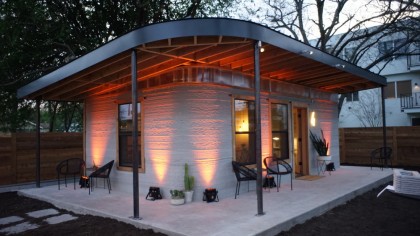 “The double wide, double tall arrangement yields a 15’ wide, 17’ tall main space, and a second floor office. This same arrangement, retrofitted with a kitchen and two bathrooms is offered as a fully prefabricated house.” the firm said.

They also said a fifth container will be added in the spring to expand it into a 4 bedroom house.

"The budget required that we explore options beyond conventional construction."

The cost includes the $135,000 price tag for the base system and the costs of all the extra modifications. This inexpensive and practical system can set a model for other schools which are thinking about an easy, low-cost expansion, according to architectural experts.

This Tesla Cybertruck Look-Alike Trailer Is Made for Electric Vehicles

The Challenges of Building Human Habitats in Space