This $36,000 Mechanical Table Clock Is for the Person Who Has Everything

The teams of MB&F and L’Epée together executed their stunning vision of a timepiece that was inspired by life under the sea, achieving a design innovation that truly sets it apart.

In today’s global economy with the advent of mass production and automation of labor, it is becoming more and more difficult to spot a one-of-a-kind production. Well, a team of Swiss designers has managed to come up with one, creating a timepiece that really is ‘for the person who has everything’, when even smartwatches seem too passé.

Swiss designers are known for their meticulous attention to detail and craftsmanship in the area of timepieces, which explains why they are behind the Octopod. This luxury table clock resembles something between an octopus resting in quiet repose on the sea floor and a spider awaiting its prey.

The unique piece was a partnership between Maximilian Büsser & Friends (MB&F) and L’Epée 1839, the first company developing the concept, and the second involved in its manufacture. MB&F CEO Charris Yadigaroglu explained the philosophy behind the Octopod:

“It gives you the time, but that’s really not the point: time is a secondary benefit. We see mechanical watches and table clocks as kinetic sculptures, as mechanical art pieces. And like art, they should stir up emotions and memories. Octopod reminds us of underwater adventures like the James Cameron classic The Abyss, of marine compasses, of octopuses, and other cephalopods – that’s where it got its name.”

Upon inspection, there are an array of interesting features to behold: the legs that can be manipulated to achieve a number of poses, ‘standing or extended legs’, the imposing glass sphere on top that reminds one of a vintage globe—it even allows for 360° turns. Also, at 4.2kg, and greatest height of 45cm, the Octopod is still modest in size and will complement the space, not obstruct the view of other objects on the table.

The Swiss designers, of course, had more than the trick of constructing the body of the clock up their sleeves. The team also created a clock mechanism that is pure genius: the flawless gears are suspended inside of the ball. Design aside, how does one tell the time? Luckily they have included a detailed explanation, which needs a couple of reads to decipher: “Hours, minutes and finely counter-balanced regulator mounted on minute hand”.

Currently the Octopod is only available in silver, blue and black, and comes in at a hefty $36,200. 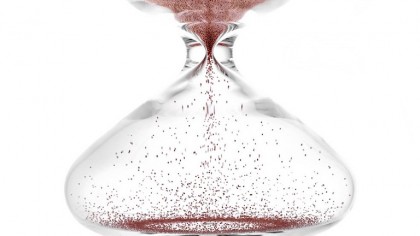 It seems the solid collaboration and shared vision between the two companies was the key to their success, but the process was not without its difficulties:

“Without getting too technical, the vast majority of mechanical watches and clocks today are simply variations of existing movements – engineers will tweak an existing movement a bit, optimize it, but they rarely develop entirely new movements. That’s why most watches are round!”

“In the case of Octopod, almost everything had to be created from scratch. Not just the movement, whose regulating system is placed very unconventionally on the minute hand, and therefore circles around the clock in 60 minutes, but also the structure of the clock itself.”

The price point reality aside, the team should congratulate themselves on a job very well done.