Just in time for Halloween, researchers with MIT created an AI to write horror and suspense thrillers inspired by "Frankenstein" author Mary Shelley.

Move over, Stephen King. There's a new horror fiction writer and the scariest part is that it's not human. An artificial intelligence program developed by researchers from the Massachusetts Institute of Technology (MIT) is writing its own spooky tales.

The Shelley AI is named after legendary Victorian-era novelist Mary Shelley. Shelley, the woman behind the legendary Frankenstein, is one of literature's key authors; her works often sent chills down readers' spines.

The AI developed from the subreddit feed r/nosleep that allows users to share their own Shelley-inspired stories. Each hour, the program puts a story prompt on its Twitter account. Then, it's up to users to engage with the AI and cultivate a story.

"...what Shelley truly enjoys is to work collaboratively with humans, learning from their nightmarish ideas, creating the best scary tales ever," wrote the MIT developers on Shelley's website.

This is the second AI software MIT crafted specifically for Halloween. Last year, engineers created the Nightmare Machine. That system used AI to generate progressively terrifying and unsettling images as over 2 million people voted on what scared the most. The Nightmare Machine was one of the first AIs to determine whether or not AIs could actually register extreme fear and other emotions in humans. 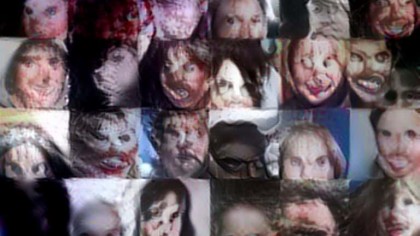 This Artificial Intelligence Program Knows What You Fear

Here are a few of our favorite stories:

The prompt: I remember his face in a look of horror, and it was agony and malice. I was trapped. I was trapped in this hospital bed.

And here's the completed story with Shelley's contributions in bold:

"I remember his face in a look of horror, and it was agony and malice. I was trapped. I was trapped in this hospital bed, his disembodied head floating above me inches from my face while my arms blistered with struggle against the bed restraints, and blood trailing out into a cloud of grey, staring into a rage. He looked directly at me with a grin on his face, his face twisted in anger. He was eyeing me, expressionless, almost smiling at me with his brown eyes. I felt my mouth gaping open, as if I was confused."

Sure, some parts of this might be a smidge awkward with its phrasing, but it's still better than most of the creative fiction I had to peer review in college. Here's another twist on the same prompt:

"I remember his face in a look of horror, and it was agony and malice. I was trapped. I was trapped in this hospital bed. "Is anybody out there?", I ask. The door creaks open slowly as the lights start to flicker. It's pindrop silence in the room, the only sound I can hear. Dragging myself out of bed, I go into the hallway and see doctor sand nurses walking int he room. I see them sitting at the table with him and their children on the bed. They look at me shocked and turn to me. "What's wrong with you?" I ask. They both smile. "Do you know where you are?" "Of course!" I respond with faked enthusiasm. But I have no idea."

Again, given that Shelley AI is working off of the response's tone, its contributions to this one are really impressive.

AIs have been given a plethora of creative opportunities in recent years. They can compose Beethoven-style music, conduct symphonies, and even create art. Thanks to MIT, we can now add "write horror fiction" to that list.

This Graphing Calculator Will Help You Learn Python Too