A massive meteor has been captured on film by locals in Finland as it burned overhead. The meteor was so bright there were reported sightings in Norway and Russia.

A meteor that shot across North Finland was miraculously captured by amateur video makers. The powerful missile lit up the skies, though it's unknown if it hit the ground or exploded in the atmosphere. The footage was captured on November 16, by several people in the area who had their cameras trained to the sky to catch a glimpse of the fabled aurora borealis. One local, Tony Bateman describes the incident: “So tonight whilst I was sat in our cottage, there was a huge bang and the cottage shook violently. We run a live video stream capturing the night sky for aurora borealis purposes, I immediately think maybe that caught the show? So I rewind the video and sure enough, there it is. Absolute goosebumps at this stage. What. a. Night.”

The meteor was so bright there were reported sightings in Norway and Russia. Eyewitness Atle Staaleen described the event: “The lights came from all around us, like a massive explosion that lasted for some five or six seconds.”

Thousands of meteors enter our atmosphere every year though most of them are too small to be detectable and an even smaller amount generate the brightness of this one. Meteor detection is still an unperfected science, while most are picked up by various space agencies across the globe, many will still remember the Chelyabinsk meteor over Russia in 2013. The large meteor went undetected by authorities until it collided with earth injecting hundreds of people in the vicinity.

Stay informed on meteor sightings in your area

If you are in the UK, you have the chance to witness the Geminid meteor shower next month as we move into the debris field left over from the Phaethon asteroid. If the weather is clear flashes and trails of light will be visible overhead even to the naked eye. 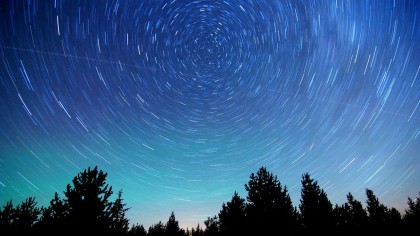 The Leonid Meteor Shower is Headed to Earth for the Weekend

Dr. Morgan Hollis, of the Royal Astronomical Society, has provided some tips to get the best experience of watching the Geminids. He suggests the best time to turn your eyes skyward is the early hours of the morning when the sky is at its darkest. Going to the countryside or away from artificial light sources will also give you an advantage. He says: “The brightest meteor showers can have up to 100 meteors an hour, or possibly more. You don’t need any special equipment to view them. You can see them with the naked eye. You should be able to see something as it’s one of the major ones. If you’re observing for a while it’s best to take something warm like a cushion and blanket. It’s very weather-dependent. If it’s cloudy you won’t see anything.” The International Meteor Organisation said the Geminids are active between 4 and 17 December, with peak rates on 13 and 14 December. If you aren’t in the UK but are keen to witness the force of space from earth, website TimeandDate provides a list of prominent meteor showers and where and when to see them.

Via: IFL Science, The Independent