It would be clear from a cursory scan of Tom Galle’s portfolio or a quick search of his name that the artist is not afraid of controversy or pushing buttons in his work. The New York-based artist describes his art as being centered around “themes of Internet Cultures, Meme Art, Technology and new media.” Interpreting the material culture that exists in society has been the creative driving force for a number of artists, both in our current times and in the past. In this vein of art, Tom Galle has created a series of weapons based on some of the most iconic corporate logos existing on the global market. Each piece represents a kind of pop quiz on pop culture.

There is the sharp, glistening dagger in the shape of the famous Nike logo, or the brass knuckles in the shape of McDonald’s golden arches, or even the metal weapon which could be described as a ninja star that looks like the Mercedes Benz logo. Still stranger is a crowbar representing Facebook, painted in a bright blue color.

A whole host of interpretations could be offered to explain the logic behind the provocative pieces. Galle was also part of a three-artist viral collaboration that looked at the impact of the Internet on our social behavior. Galle referred to the art as being "internet art [in the sense that it is a] commentary or insight on internet behavior and consumption—or on contemporary technology in general."

Another look at the weapons reveals that the artist’s aim, it could be argued, is to emphasize the pervasive nature of corporate logos. They have, unarguably, penetrated our psyches. Subliminal messages dominate advertising are responsible for not only controlling consumer impulses to spend but in terms of logos, establishing and helping to maintain brand recognition and loyalty.

Dr. Bahador Bahrami of University College London’s (UCL) Institute of Cognitive Neuroscience said of the findings of a study on the impact of subliminal message on the brain: 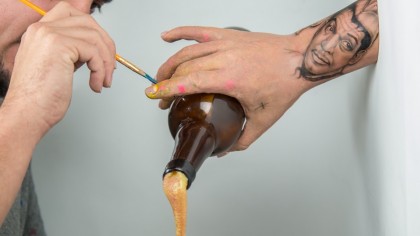 "What's interesting here is that your brain does log things that you aren't even aware of and can't ever become aware of. The brain is open to what's around it. So if there is 'spare capacity', in terms of attention, the brain will allocate that resource to subliminal activity,” though quick to add that, "What this study doesn't address is whether this would then influence you to go out and buy a product."

In other words, the influence of these advertising on our brains, though apparent, cannot be definitively assessed. The study’s objectives, however ambitious, did represent the first of its kind in terms of trying to provide sound physiological evidence of this important link.

Regardless of the medium or method chosen, the objective is essentially the same: to open dialogue for explaining the impact of social phenomena many of us understand exist but find difficult to express.