A French multidisciplinary designer called Parse/Error created a connected cloud lamp that goes from a peaceful fluffy cloud to a raging storm every time Donald Trump tweets. He calls it “Political Lamp.”

The lamp is able to react in real time to Trump’s social media messages; each tweet is represented by flashes of lightning swirling inside the cloud and “disturbing the soft light of the lamp.”

“The choice of setting the Political Lamp to follow the tweets of Donald Trump is explained by the fact that he perfectly embodies a dangerous era, where the words of one man on a global social network can endanger the fate of millions. The idea of the Political Lamp is to hide its true nature behind a beautiful object, which immediately modifies the observer’s behavior when its purpose is revealed, causing anxiety and fascination,” writes Parse/Error on his website.

At first glance, “Political Lamp” is merely a swathe of pillow stuffing shaped around a bulb. Parse/Error doesn’t reveal precisely how he achieved the bulb with a brain, but it is mighty effective.

At the moment, the designer has no plans to mass produce the lamp, despite the fact that given the current political climate, it would be a gimmick that could do well.

In addition to the Political Lamp, the independent designer also developed “The Earthquake Lamp,” another connected lamp that reacts in real time to earthquakes instead of Trump tweets.

The lamp is a series of tubes, resembling a giant pan flute that gives off light pulses and a few rumbles each time an earthquake occurs on the planet.

“A hidden face that immediately changes the observer’s behavior, between anxiety and fascination, but also invites him to contemplate the reality and beauty of a living planet, constantly in motion,” explains the artist on his website.

The artwork is described as a flattened planisphere, representing the axis of longitudes. The light and pulses change according to the area of the earthquake on the planet and its magnitude, varying both the color and duration of the pulsations as well as the volume. It achieves this by being linked to a subwoofer which produces a powerful rumble mimicking that of a tectonic shift.

Another featured artwork on his website is a Life Clock --which displays the number of seconds since a person’s birth; the graphics are inspired by a life bar in video games and based on the average life expectancy in France. 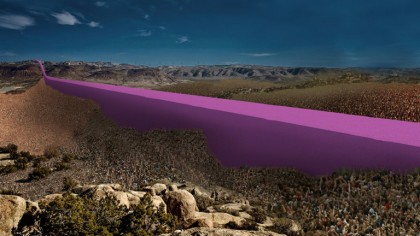 It seems this artist is hell-bent on making us aware of ourselves and what’s happening around us, using stunning works of art. Not a bad idea.

Parse/Error, who is based in Marseille, France is purposely mysterious, claiming on his website that he is self-taught and his work is “born of the encounter between art, design, and technology.”

He’s also the founder and editor of the UFUNK.net webzine, an art forum dedicated to new and innovative works.