Japanese artist creates black and white drawings that completely trick the eye so much that people believe they are in fact photographs.

Japanese artist Kohei Ohmori is creating drawings that are so stunningly lifelike that everyone swears they are photographs. The 23-year-old’s images—black and white pencil drawings—are taking the world, and of course, Twitter, by storm.

The artist’s process involves devoting as many as 200 hours to any given project, and his portfolio reveals a striking attention to detail. His meticulous and highly subtle shading, use of lines that are ultra-thin, as well as his ability to execute his drawings with a remarkably steady hand all come together in each piece he produces. The piece which many consider as his signature is the headshot of British model Sophia Blackbrough. His latest piece, which his followers have been eagerly awaiting, is a shiny nut and bolt composition.

The piece, recently completed, took 280 hours to finish, according to Ohmori. Towards the end of the process, his older brother shared some of his pieces on Twitter, adding, “My little brother is amazing at drawing these precise pictures with pencil. He was drawing this bolt and nut nonstop, and I could feel a little insanity from him. This one took him 240 hours (still not done). It's not a photo.”

The artist’s work is creating a sensation back in his home country of Japan, but he is hoping to raise funds to continue his work and reach a larger audience.

Ohmori is definitely not the only artist to emerge in this area. Nigerian artist Arinze Stanley Egbengwu is pushing similar boundaries in his lifelike portraits. The artist began drawing at the age of 6 and produces very emotionally-charged pieces, capturing incredibly fine facial features in each work he creates.

Ohmori’s work is undoubtedly a commentary on a larger-scale shifting of boundaries between what is considered real versus what is considered unreal. It is also no small coincidence that both Ohmori and Egbengwu, their ages 23 and 24, respectively, are millennials, part of a generation that finds new and innovative ways to integrate the tech-driven and tech-centered realities of our era into various mediums of art. 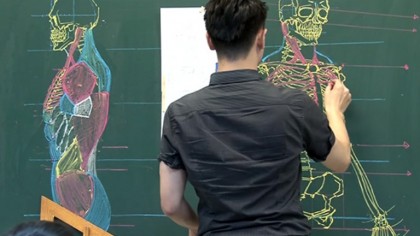 Professor Stuns His Class with His Anatomically Perfect Drawings

Hyperrealism, the genre that both artists work in, involves a more technically challenging approach to creating an image than similar artistic categories like photorealism. More relevantly, the genre emerged around the turn of the 21st century, the same time that our feet became permanently planted in the Digital Age.

In other words, the work of artists like Ohmori and Egbengwu are interpretations of the lens through which we see today’s world. Ironically, taking a look at the work of some of the most prominent sculptors working in hyperrealism, one sees images that resemble both humans as well as AI humanoid robots.

The artists’ work, then, is showing us perhaps that we should become more comfortable with these shifting boundaries—from the advent of the cryptocurrency and its dramatic change to our basic concepts about fiscal operations, to the controversial growth of automated and mechanized labor, which is changing the way we approach the idea of work performance and output, it is undeniable that change is upon us.