Researchers at Harvard's Wyss Institute have updated their RoboBee with the ability to jump in and out of water.

When you think Robot Bees, you’re probably thinking of the Black Mirror episode “Hated in The Nation,” where--spoiler alert--the bees are tiny robotic killers with a gnarly sting. However, in real life, Harvard’s autonomous robot bees are a bit different and they recently received an upgrade.

The RoboBee Project was first revealed in 2013, researchers at the Wyss Institute developed the bees as, “manmade systems that could perform myriad roles in agriculture or disaster relief.”

Averaging the size of a paperclip and weighing one-tenth of a gram, these bees fly using “artificial muscles” made of materials that contract when a voltage is applied. One of a few methods used in biomimetics to imitate organic muscle movement.

Development of the RoboBees was prompted by the need to create autonomous micro-aerial vehicles capable of self-contained, self-directed flight and of achieving coordinated behavior in large groups, according to the Wyss Institute.

When they were first established the RoboBees could only takeoff and land. Since then they’ve been able to stick to surfaces and even swim underwater.

Now they can dive in and out of that water, a huge milestone for a small mechanical insect. We all recognize the difficulty for many small, flying insects to get out of a watery situation. The RoboBee is no exception, at its meager weight and size, surface tension becomes an unstoppable pulling force being ten times the robots weight and three times its lifting power.

“The force from surface tension feels like an impenetrable wall,” said Harvard professor of engineering Robert Wood in a press release.

To make sure these extraordinary bees can do what they were made for then they must be able to adapt to an array of natural surroundings. With this in mind, the researchers fitted the RoboBee with a tiny combustible rocket, which propels the bee through the water’s surface tension. Gas fills a chamber in the bee’s interior, which is lit by a small spark, then with that force, it launches the robot skyward. 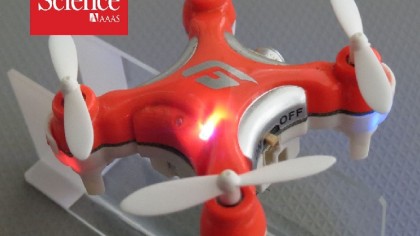 Originally the bees were constructed using piezoelectric actuators – strips of ceramic that expand and contract when an electric field is applied, carbon fiber for the body frame and plastic embeds for joints. With the addition of a propellant system, the bee had to be redesigned. Now it has within it a central gas chamber, along with four buoyant outriggers or robot floats.

It’s a slow and steady maturation for the RoboBee, while it can fly, land, takeoff, and move in, and out of the water, there is still not enough room on its tiny body to for sensors or a guidance system. Meaning, that we’re still a long way from using these autonomous insects for agricultural purposes like pollinating crops. But we’re a lot closer.

“We hope that our work investigating tradeoffs like weight and surface tension can inspire future multi-functional microrobots – ones that can move on complex terrains and perform a variety of tasks,” said Yufeng Chen, Ph.D., currently a Postdoctoral Fellow at the Wyss Institute who was a graduate student in the Microrobotics Lab at SEAS when the research was conducted and is the first author of the study.

Via: The Verge, Wyss Institute